What scientists do with leftover beer 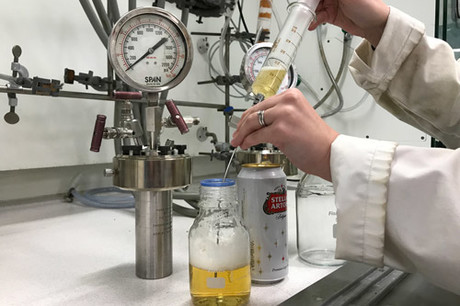 Beer can help develop sustainable petrol, according to scientists from the University of Bristol.

Bioethanol, which can contain up to 10% ethanol, is commonly used as a sustainable alternative to petrol in the US. However, it has many downfalls, including a lower energy density, it mixes too easily with water and it can be corrosive to engines.

Scientists have therefore turned their attention to converting ethanol to butanol, which is a better fuel alternative.

Over the last few years, chemists from Bristol’s School of Chemistry have achieved this in laboratory conditions with pure, dry ethanol. But to test if it would work using real ethanol fermentation broths which contain about 90% water and other impurities — they used beer.

Professor Duncan Wass, whose team led the research, said the alcohol in alcoholic drinks is actually ethanol, making them “an ideal model for industrial ethanol fermentation broths — ethanol for fuel is essentially made using a brewing process”.

“If our technology works with alcoholic drinks (especially beer, which is the best model) then it shows it has the potential to be scaled up to make butanol as a petrol replacement on an industrial scale,” he said.

Published in the journal Catalysis Science & Technology, the scientists successfully used a catalyst — chemicals which can speed up and control a chemical reaction — to convert the ethanol in beer into butanol.

The next step is to find a way to scale the technology up to industrial application. Wass said that beer was very useful in the testing process, but they wouldn’t necessarily use beer on an industrial scale as they would not want to compete with potential food crops.

“There are ways to obtain ethanol for fuel from fermentation that produce something that chemically is very much like beer — so beer is an excellent readily available model to test our technology.”

The upscaling process could take up to five years, but their findings suggest that producing butanol-based sustainable fuel on a large scale is a promising prospect for the future.

“Turning beer into petrol was a bit of fun, and something to do with the leftovers of the lab Christmas party, but it has a serious point,” Wass said. “Beer is actually an excellent model for the mixture of chemicals we would need to use in a real industrial process, so it shows this technology is one step closer to reality.”

Six conditions that can be treated with medical marijuana