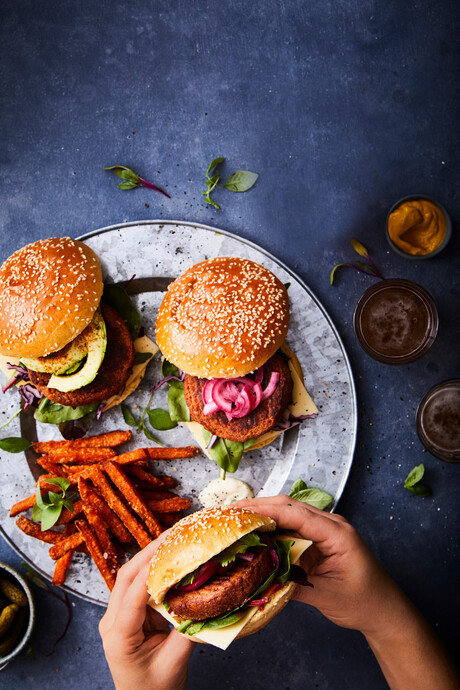 Research shows that Australia is the third fastest-growing market in the world for plant-based foods, and the local plant-based market is expected to reach A$3B by 2030.

Among Australian consumers, 55% are intending to eat more plant-based foods. Over in New Zealand, more than a third of consumers say they are eating less meat or none at all. People associate eating less meat and a wholesome, balanced diet with a longer, healthier life. In fact, 72% of Australian consumers believe a flexible diet that includes meat alternatives gives them more options to meet their health goals.

But while taste is the #1 reason people choose plant-based foods, 43% of Australian consumers say current offerings lack the taste and texture of meat, although 50% agree that food labelled as “plant-based” can be described as delicious.

All this shows that the plant-based market is dynamic and continues to evolve, with the region presenting an incredible opportunity for innovative, great tasting plant-based foods.

In Australia, the growing demand for innovation in plant-based burgers is fueled by flexitarians. As they consume both meat and meat alternatives, flexitarians are unwilling to compromise on flavour and expect plant-based products to deliver authenticity, and will not accept anything that tastes artificial.

According to Kerry’s latest research with over 1,500 consumers across four countries — US, UK, Australia and Brazil — to uncover sensory expectations around plant-based burgers, and cheese alternative slices (US and UK), Australians use beef burgers as the benchmark — they want something that can replicate the taste experience of a burger grilled on a BBQ or eaten in a restaurant. They also have higher taste expectations. For example, while bitter plant-based notes were rejected by all the markets researched, Australians were the most sensitive and least accepting of it and other artificial notes.

Succeeding in the plant-based burger space in Australia requires finding the right balance of sensory attributes that will capture consumer interest and elevate their taste experience. According to the study, Australians ranked texture as the most important. This is followed by flavour and aftertaste, cooking and cooked appearance, raw appearance, cooked aroma, and lastly, feel.

For Australians, flavour alone is not enough to achieve the ideal plant-based burger taste experience. Texture is the top priority, with 74% of Australian consumers expecting a burger with a meaty firmness to have great texture.

Their decision making is influenced by what they can feel in a bite. Kerry’s analysis shows that their texture journey begins from the moment they sink their teeth into the patty and break through the outer crisp, to the resistance they feel with each bite, how the patty is broken down to smaller pieces, how the oil and moisture are released, all the way to the clean after feel in their mouth.

As a result, they are looking for products with a firm outer (a result of charring) and a soft, succulent inner, which 70% of Australian consumers categorised as ‘caramelised on the outside and juicy on the inside’. However, it is a delicate balance as they are not in favour of plant-based burgers that are too crispy on the outside and too soft in the middle, as this suggests poor quality. The challenge and opportunity for manufacturers is to achieve a good variation in bite that can deliver both crisp and succulence.

A good balance of savoury and meaty

Consumers in Australia are looking for plant-based burgers that can replicate the charred, caramelised notes and savoury taste of a real beef burger, with 70% saying they are likely to buy a plant-based burger with ‘authentic chargrilled burger’ descriptions. Products with these descriptions are also perceived to be better with 76% of Australians saying they believe it to be delicious.

With beef burgers as their benchmark, it’s no surprise that plant-based products that can deliver on depth and complexity of flavour with a good balance between savoury and meaty do well in Australia. Consumers are looking for multiple notes in each bite, from meaty, slightly smoky, with subtle saltiness, slight pepper, and subtle herb notes, and cooked fat.

While Australians like complexity, they also prefer flavours to be natural with no synthetic or artificial notes. They find the bitterness, ‘cardboardness’ and beaniness usually present in plant-based products unappealing and also consider the chemical notes created from excessive masking a turn off.

Too much flavour can also put Australian consumers off as many products in the market overcompensate with added salt or sodium, resulting in a lingering after taste.

Across all the four markets polled, overcooking is a common problem which leads to a poor eating experience. In Australia, in particular, the cooking process has a significant impact on the consumer’s overall satisfaction as it not only gives them visual cues as to when their food is cooked and safe to eat, it also adds an emotional element of excitement and anticipation.

The consumer journey begins even before they get to cooking. Australians prefer to have the pink tone of the raw meat to be muted and natural — they don’t want to see the visible fat globules and pink juices that mimic the bleeding in typical meat, citing it as ‘going too far’ in terms of replicating the overall meat experience.

Seeing the colour change from red to brown, and brown to charred or caramelised is the home run as it creates a perception that rich, deep flavours are developing. On the flip side, Australians do not like seeing visual cues that relate to overcooking such as the product burning, sticking to the pan and falling apart.

In addition, the Kerry study found that sensory cues, such as the aroma and sizzle sound that cooking produces, also help to enhance the cooking experience; 62% of consumers say increasing intensity of the aroma until it reaches meaty or smoky and the satisfying sizzle sound of a patty being cooked add to the drama in the pan, creating a positive expectation that the burger will be delicious.

Click here to discover insights on the Australian consumer expectations for plant-based.

A winery refitted its bottling plant, upgrading its drives and air conditioning to increase its...

In chemistry, chromatography refers to all those physico-chemical separation processes in which...

Interface have provided sensors for industrial automation solutions to thousands of customers...