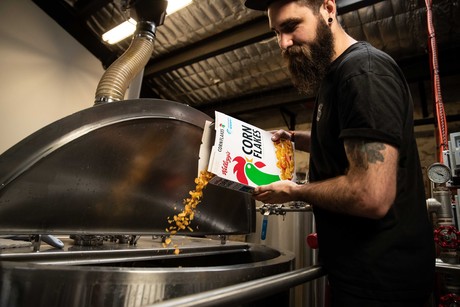 Partnering with local microbrewery One Drop Brewing Co., Kellogg has introduced a limited-edition Kellogg’s Corn Flakes Nitro Milkshake IPA. It is a craft beer you shake before drinking, and the taste is described as creamy with a tropical bitterness of strawberry, passionfruit, coconut and mango.

Kellogg has been making Corn Flakes at Botany, NSW, for 90 years, and this is also the location of One Drop Brewing Co. Hence, the beer was brewed and canned in Botany.

Bruno Madonna, Director of Research and Technology at Kellogg, said: “We’ve always had a love of combining innovation with great tasting product at Kellogg.

“Kellogg’s Corn Flakes has been a catalyst to many amazing creations over the years so partnering with local Botany brewery, One Drop, seemed like a no brainer. This beer is a fun way to remind Aussies of the versatility of cereal.”

Nick Calder-Scholes, Head Brewer of One Drop Brewing Co. said: “We’ve seen the craft beer market grow exponentially the past few years and we wanted to bring a fresh take to the scene. Using one of Kellogg’s best-selling cereals to produce a trendy Nitro Milkshake IPA was an amazing opportunity to create something different.”

What were the challenges?

When asked about the challenges faced when making this Kellogg’s innovation, Calder-Scholes said the manufacturing process didn’t differ much to its normal beer process. “Corn Flakes is such a versatile cereal, and was used in the same way we would use any base grain — pre-milled and mixed together in our mash tun. We supplemented a portion of our original Gladfield Malted Barley with Kellogg’s Corn Flakes and used them in the same way.

“The main challenge we faced was during the sparging (or rinsing) process. We found the Corn Flakes to be a softer substance, which disintegrated much more than our regular barley usually does, stretching out the rinsing process from 1.5 to over 3 hours. Afterwards, we sent both the barley and Corn Flakes to our farmer to be re-used for livestock feed.”

The Nitro Milkshake IPA is available until stock runs out.