Researchers at the Georgia Tech Research Institute (GTRI) have developed a prototype system that uses advanced imaging technology and a robotic cutting arm to automatically debone chicken and other poultry products.

The Intelligent Cutting and Deboning System employs a 3D vision system that determines where to cut a particular bird. The device automatically performs precision cuts that optimise yield, while also greatly reducing the risk of bone fragments in the finished product.

“Each bird is unique in its size and shape,” said Gary McMurray, chief of GTRI’s Food Processing Technology Division. “So we have developed the sensing and actuation needed to allow an automated deboning system to adapt to the individual bird, as opposed to forcing the bird to conform to the machine.” 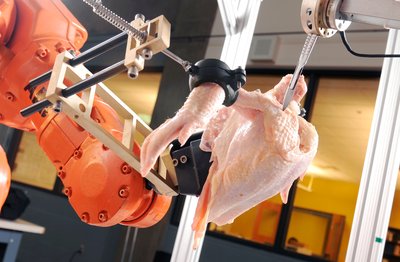 A robotic system used in the Intelligent Cutting and Deboning project prepares to slice through the shoulder joint of a chicken. The system, developed by the GTRI Food Processing Technology Division, is pursuing two goals: cutting close to the bone to maximise breast meat yield and ensuring food safety by avoiding creation of bone chips.

In the Intelligent Cutting and Deboning System, a bird is positioned in front of the vision system prior to making a cut, explained GTRI Research Engineer Michael Matthews. The vision system works by making 3D measurements of various location points on the outside of the bird. Then, using these points as inputs, custom algorithms define a proper cut by estimating the positions of internal structures such as bones and ligaments.

“Our statistics research shows that our external measurements correlate very well to the internal structure of the birds, and therefore will transition to ideal cutting paths,” Matthews said. “In our prototype device, everything is registered to calibrated reference frames, allowing us to handle all cut geometries and to precisely align the bird and the cutting robot. Being able to test all possible cut geometries should enable us to design a smaller and more simplified final system.”

The system employs a force-feedback algorithm that can detect the transition from meat to bone, said Research Engineer Ai-Ping Hu. That detection capability allows the cutting knife to move along the surface of the bone while maintaining a constant force.

Since ligaments are attached to bone, maintaining contact with the bone allows the knife to cut all the ligaments around the shoulder joint without cutting into the bone itself. A similar approach can be used for other parts of the bird where meat must be separated from bone.

Hu explained that the force-feedback algorithm uses a force sensor affixed to the knife handle. During a cutting operation, the sensor enables the robot to detect imminent contact with a bone. Then, instead of cutting straight through the bone, the system directs the cutting tool to take an appropriate detour around the bone.

“Finetuning is needed to adjust the force thresholds, to be able to tell the difference between meat, tendon, ligaments and bone, each of which have different material properties,” Hu said.

McMurray said he expects the Intelligent Deboning System to match or exceed the efficiency of the manual process. Testing of the deboning prototype system, including cutting experiments, has confirmed the system’s ability to recognise bone during a cut and to avoid bone chips - thus demonstrating the validity of GTRI’s approach. 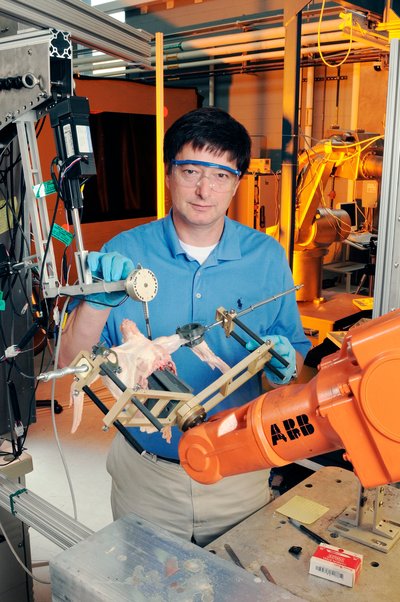 “There are some very major factors in play in this project,” McMurray said. “Our automated deboning technology can promote food safety, since bone chips are a hazard in boneless breast fillets. But it can also increase yield, which is significant because every 1% loss of breast meat represents about $2.5 million to each of Georgia’s 20 poultry processing plants.”