Robot hand comes to grips with both fragile and heavy objects 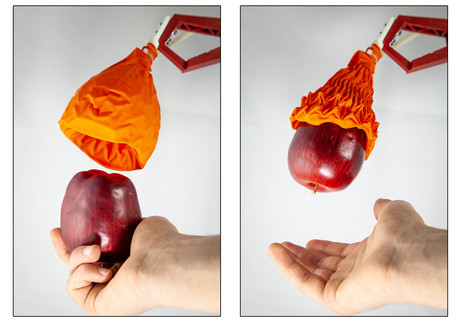 Researchers from MIT and Harvard have developed a new robotic gripper with a cone-shaped origami structure that collapses in on objects, much like a Venus flytrap. The gripper is capable of picking up items that are as much as 100 times its weight and grasping a wide range of objects — from soup cans and wine bottles through to a single broccoli floret or a grape.

The project is one of several in recent years that have researchers thinking outside the box with robot design. Ball-shaped grippers, for example, can handle a wider range of objects than fingers, but still have the issue of limited angles. Softer robotic fingers typically use compressed air, but aren’t strong enough to pick up heavier objects.

The structure of this new gripper, meanwhile, takes an entirely different form. Cone-shaped, hollow and vacuum-powered, the device was inspired by the ‘origami magic ball’ and can envelop an entire object and successfully pick it up.

“Previous approaches to the packing problem could only handle very limited classes of objects — objects that are very light or objects that conform to shapes such as boxes and cylinders,” said MIT Professor Daniela Rus, Director of MIT’s Computer Science and Artificial Intelligence Laboratory (CSAIL) and one of the senior authors of a new paper about the project.

“With the Magic Ball gripper system we’ve shown that we can do pick-and-place tasks for a large variety of items, ranging from wine bottles to broccoli, grapes and eggs.

The gripper has three parts: the origami-based skeleton structure, the airtight skin to encase the structure, and the connector. The team created it using a mechanical rubber mould and a special heat-shrinking plastic that self-folds at high temperatures.

The magic ball’s skeleton is covered by either a rubber balloon or a thin fabric sheet, not unlike the team’s previous research on fluid-driven origami-inspired artificial muscles (FOAM), which consisted of an airtight skin surrounding a foldable skeleton and fluid.

The team used the gripper with a standard robot to test its strength on different objects. The gripper could grasp and lift objects 70% of its diameter, which allowed it to pick up and hold a variety of soft foods without causing damage. It could also pick up bottles weighing over 1.8 kg.

The robot currently works best with cylindrical objects like bottles or cans, which could someday make it an asset for production lines in factories. Not surprisingly, the shape of the gripper makes it more difficult for it to grasp something flat, like a sandwich or book.

This project was supported in part by the Defense Advanced Research Projects Agency, the National Science Foundation and Harvard’s Wyss Institute.

Printed biosensors to monitor freshness of meat and fish

US researchers are using aerosol-jet-printing technology to create graphene biosensors that can...

Bacterial biofilms can cause headaches for the food processing industry, but researchers in Tokyo...

UK-based food scientists are working with a producer of icy treats to develop ambient versions...