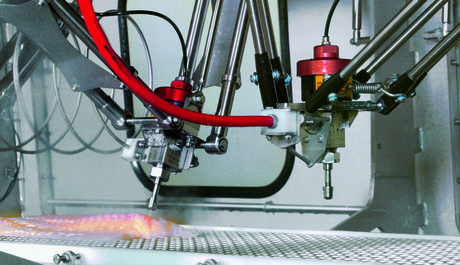 The Icelandic company Valka, headquartered in Kópavogur, specialises in the development of automation solutions for the fish industry and has made a name for itself with technological innovations in this market, which is characterised by demanding production requirements. The system developed by Valka produces extremely precise cuts at different angles through a combination of X-ray radiation, 3D image processing and a robot-controlled water-jet cutting head. Fully automatic deboning, filleting and portioning of fresh fish are accomplished quickly, reliably and efficiently, giving Valka’s customers key competitive advantages.

Valka has specialised in the development of automation solutions for the fish industry since the company was founded in 2003. Among other solutions, the company has introduced systems for fish cutting, deboning, weighing, packaging and ice dosage onto the market.

“In the past we worked with different technologies and suppliers, which made the variety of interfaces increasingly difficult to handle. That’s why we decided to fundamentally revise our automation infrastructure by choosing the open PC and EtherCAT-based platform from Beckhoff as the universal controller,” said Valka’s Marketing Manager Ágúst Sigurðarson, describing the initial challenge that arose two years ago.

“Today, we can say we made the right decision,” added Einar Björn Jónsson, Product Development Manager at Valka. “Instead of special components from various suppliers we now use standard components from Beckhoff and get everything from a single system: the PC-based control platform integrates all necessary functions, from the PLC and the robot axes through to the safety systems and the HMI. The effort required for the manufacturing, calibration and troubleshooting of our machines has been reduced significantly on account of the centralised control platform.”

The control platform of the cutting machines consists of a C6920 control cabinet Industrial PC (IPC) with Intel® i7 quad-core processor and TwinCAT 3 automation software. All four processor cores are utilised in order to exploit the full performance of the IPC: the operating system and the motion control technology each use one core, while the PLC uses two cores. On the networking side, compact EtherCAT I/O modules are used for the I/O connections. Safety technology is also integrated seamlessly into the control system via EtherCAT safety I/O modules. The motions of the cutting robot are controlled in software via TwinCAT NC I and TwinCAT Kinematic Transformation, while AX5203 EtherCAT Servo Drives and servomotors from the AM8000 series with One Cable Technology are used as the drive technology.

The Valka cutter removes bones and cuts the fish into precise portions fully automatically. “We developed a combination of X-ray radiation, 3D image processing and robot-controlled water-jet cutting heads that makes it possible to identify even very fine bones down to a width of 0.2 mm. The robots can work at different cutting angles and cut the bones out with such high accuracy that we now have losses of only 4 percent compared to 6 percent previously. For our customers that means additional revenues of several million kroner per year, depending on the tonnage of fish processed,” Jónsson stressed.

Each fish fillet is analysed precisely and cut into even portions with regard to size, weight and thickness according to the respective specification. In addition, different cutting patterns or programs can be defined in the software and various fillet sizes can be determined flexibly.

“A key special feature of these robotic solutions is that they are operated with a standard software platform — entirely in keeping with the philosophy of Beckhoff that all software tools must function on a simply structured platform,” said Jónsson.

Iceland and Norway are among Valka’s most important sales markets: “With our faster and more intelligent production solutions we are also increasingly gaining market share in the rest of Europe and in the United States. That’s an exciting development, and this progress is all backed by reliable technological support from Beckhoff,” concluded Sigurðarson.