Nothing but beer leaves Erdinger brewery

One of Germany’s largest private breweries, Erdinger Weissbräu, produces specialty beers in its plant in Erding, Munich, six days a week. Its products are exported to more than 70 countries - and this figure continues to grow.

The company is known for its strict quality policy and maintains a permanent chain of security controls for its keg filling and packing process.

Erdinger decided to ensure 100% protection of its keg cleaning and filling process. Lye, a caustic chemical, is used in the keg cleaning process, and the company foresaw that, however careful the production, it was conceivable that a keg containing lye could be delivered to customers.

The company found that non-contact temperature measurement using spot pyrometer thermometers was not sufficiently reliable to prevent an accident. Instead, an infrared camera was selected as the best option. When correctly adjusted and interpreted, the camera’s images enable a virtually error-free measurement. 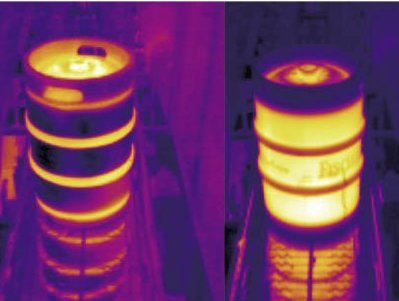 A FLIR Systems A-Series thermal imaging camera now measures the temperature of every keg before it leaves the conveyor belt of the filling installation. If the infrared camera identifies a keg with a temperature different from the norm, it sets off an alarm and the conveyor belt is automatically halted. The keg is then manually removed.

While the monitoring system is regularly inspected, even in error simulations the camera has proved reliable. Any deviations have been identified immediately, triggering the appropriate alarm stage. 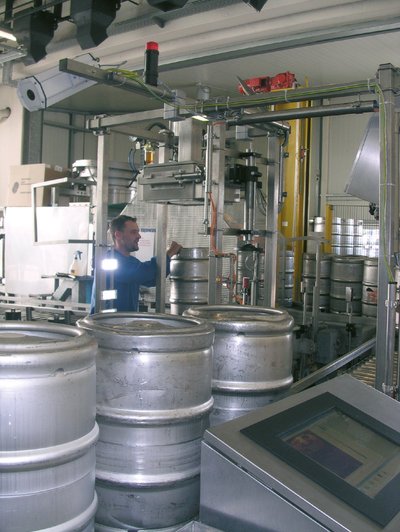 The camera is connected to a touch-screen monitor that shows which size and type of keg is going through the cleaning and filling process. A thermal image of each keg as it goes through the process is shown on the monitor screen in real time. The system is not incorporated into the washing and filling machinery, which means it can be used on all new or existing filling installations.

“Not one keg filled with lye has left the filling shed. The infrared camera solution is now an established part of our plant,” a spokesperson for Erdinger said.