Meet the brewer that never brews the same beer twice 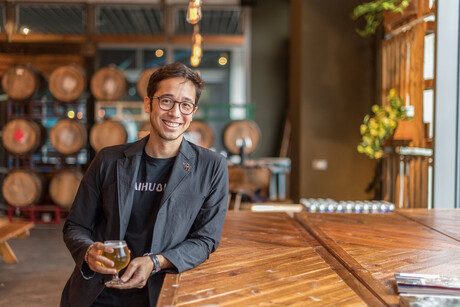 Taihu Brewery likes to surprise the market with innovative approaches, such as tea-flavoured beers or sours with smoked Taiwanese plum.

“When it comes to developing recipes and designing labels, for many of our beers we take inspiration from Asian culture,” explained Peter Huang, one of the firm’s original founders and today its General Manager.

But for the brewing process itself, the brewer adopts a stringently scientific approach: “Our brewery is like a laboratory, in which we rigorously test every step, every altered ingredient, and keep detailed records. Our paramount goal is to continually improve our beers. We never brew the same beer twice: sometimes we alter the fermentation temperature, sometimes we use new hop varieties. You see, we never regard anything as perfect, we’re always striving to become even better,” he explained.

For these trials and small brews, Taihu has installed a Steinecker MicroCube. With its size of 10 hectolitres, it’s ideally suited for trying out new combinations, and these beers are subsequently tested for popularity in one of the firm’s own six taprooms in Taipeh. If a recipe proves successful, Taihu can then use its CombiCube B in the brewhouse to make batch sizes of up to 50 hectolitres.

The brewery was using a MicroCube from its very first day — but the choice of this model was more or less coincidental.

Originally, Taihu contacted Krones only for the bottling kit. “We thought we’d be able to manage the brewing ourselves, since we have very experienced staff in the brewhouse, particularly. But when it came to the bottling operation, we wanted to be on the safe side, in order to create a stable, long-shelf-life product of consistently high quality,” Huang explained. “During these meetings, we then found that for brewing operations, too, Krones offers solutions for the small output range... A short time later, we ordered the MicroCube, and then immediately began planning a second, larger brewery centred around the CombiCube B.”

Besides the brewing equipment from Steinecker, the brewery ordered the bottling kit as well, of course: a filler-closer block from Kosme. 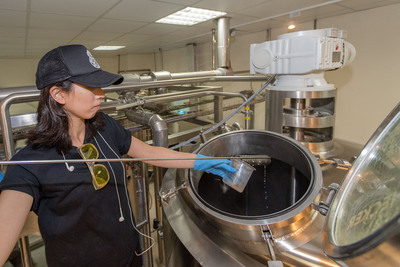 For experimental beers and small brew sizes, the team around Taihu’s Head Brewer Winnie Hsu are working with a Steinecker MicroCube.

Although the brewery itself is still young, there’s a team behind it overflowing with experience and passion. Taihu’s Head Brewer is Winnie Hsu, who has clocked up more than 11 years of experience in the craft beer business.

The craft beer market in Taiwan is still a relatively small one: Huang estimates the number of breweries at about 10. Taihu ranked among the pioneers, since its taproom in Taipeh, opened in 2014, was the first to serve exclusively craft beer. The idea came during the planning phase for the brewhouse: “The government was not used to craft breweries, and it took a relatively long time before we had all the requisite approvals on file. So we decided to make good use of the delay and test our beers for popularity and acceptance,” Huang said. The principle involved was a simple one: no food and no chairs, just craft beer. “We wanted to do more than just serve beer, we wanted to bring people together,” he explained. Meanwhile, Taihu’s beers are available not only in its own taprooms, but also in other bars, restaurants, hotels and supermarkets.

It’s not only in its beers and recipes, but also in the design of its containers that Taihu invests such passionate creativity: the brewery has already packed about 30 different types in cans or bottles — and each of the associated labels has its own story to tell. While some play with the various flavours and raw materials involved, others picture Taiwan’s magnificent scenery.

In Taihu’s logo, too, even the details are significant: “The shape is a hulu, a traditional vessel for alcohol in Chinese culture. In the centre is a tiger, recalling the times when Taiwan ranked among the four Tiger nations and was thus one of the fastest-growing economies in Asia. The hop cones surrounding it stand for our product, you see, while the Chinese characters describe our name: the ‘tai’ stands for ‘Taiwan’, the ‘hu’ for ‘tiger’,” Huang explained.