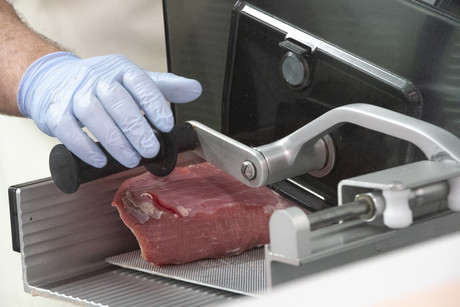 Workplace Health and Safety Queensland (WHS Queensland) is investigating an incident from August 2019 where a young worker suffered serious hand injuries at a meat processing plant in Brisbane. It is believed the worker’s hand was severed while he was operating a guillotine-style slicing machine used to cut frozen meat.

Machines are a major cause of death and injury in Australian workplaces, with unguarded, poorly protected or inadequately isolated machinery putting workers at risk of limb amputation or electric shock, the regulator warned. Meat slicers also have additional hazards, including access to the cutting blade while it is moving, continued operation of the machine while covers or guarding are removed or open, and lack of an emergency stop device within the operator’s reach.

To protect workers’ health and safety, meat processing plants must identify and eliminate or minimise risks, so far as reasonably practicable, according to the hierarchy of control. In cases where risks cannot be eliminated, persons conducting a business or undertaking (PCBUs) should isolate the hazardous machines from people. If this is not possible, PCBUs should consider implementing engineering controls. These could include a permanently fixed guard if access to parts of the machine is not required during operation, maintenance or cleaning, or an interlock guard if access is required. Interlock guards connect to the machine’s operational controls so that the machine is prevented from starting until the guards are closed. Guards should not be able to open or be removed until the moving parts, such as cutting blades, have stopped.

PCBUs can also supply a food pusher/plunger to feed meat into the slicer. Further, PCBUs can add operator control devices to the machines — ensuring they are easily reachable, read and understood by operators, and located outside of danger zones. They should be accessible for maintenance and only function when used intentionally. Any remaining risk must be minimised using administrative controls such as lockout-tagout procedures, warning signs or labels, and provision of information, instruction, training and supervision, as well as a system that reports faults to ensure machine maintenance. Control measures should be regularly reviewed to ensure they are still effective. If problems are identified, PCBUs should go back through risk management steps and information and make further decisions about control measures.

From 1 July 2014 to 30 June 2019, OIR in Queensland was notified of six events involving an amputation-related incident within the meat, poultry and smallgoods wholesaling industry.

In June 2019, a company was fined $90,000 when a worker’s left index and middle fingers were amputated. The young worker was removing hocks off pigs using a single-handed hock cutter at a meat processor when his fingers were trapped, resulting in amputation.

In 2017, a company was fined $42,500 after a worker was injured cleaning a viscera table with a high-pressure hose while it was operating. During a final check of the work area, he found a piece of offcut under a table and attempted to remove it. He slipped and caught his arm in the machinery, resulting in traumatic amputation of his hand and forearm. He also sustained broken ribs and a dislocated shoulder.