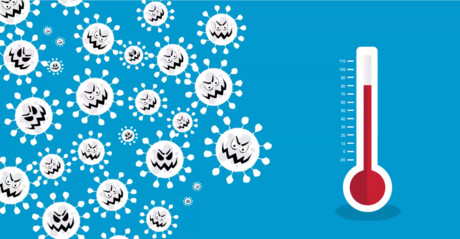 Hygiene-sensitive applications, as used in food and beverage companies, aim to reduce the risk of microorganism growth in the final product and therefore also eliminate potential sources of contamination from utilities such as compressed air.

To stop microorganism growth, it is necessary to eliminate conditions that permit organism reproduction.

All microorganisms require the five following factors to remain viable and reproduce:

Nutrients, proper pH and gases are not affected by the air in the compression process, providing that an oil-free compressor with an aftercooler is used. The last two, appropriate temperature and moisture, can directly be linked to or influenced by compressing atmospheric air.

Heat is lethal to microorganisms, but each species has its own heat tolerance. Mesophilic bacteria and fungi prefer moderate temperatures, between 25 and 40°C. Thermophilic (heat-loving) microorganisms grow at a temperature between 45 and 90°C. During a thermal destruction process, such as pasteurisation, the rate of destruction is logarithmic, as is their rate of growth. This means that bacteria subjected to heat are killed at a rate proportional to the number of organisms present.

The destruction process depends both on the temperature and the time required. The high temperature in oil-free compression elements (>180°C) is high enough to reduce present microorganisms significantly. However, the duration of this temperature is not long enough to be considered as sterilising.

In other words, decreasing temperatures and moisture (RH) are reducing the possibility of creating a viable atmosphere for microorganisms.

The dew point is the temperature to which air must be cooled to reach saturation. This means a given concentration of water vapour in the air will form dew. It simply is a measure of moisture in the air. A dew point is expressed as a temperature on the scale °C or °F. It can be seen as the maximum water content, in grams or ounces, for a standard volume of air at that given temperature.

When talking about compressed air, this term is specified as the pressure dew point or PDP. This is important because changing the pressure of gas also changes its dew point. The PDP is the maximum water content in the compressed air under pressurised conditions. If the air comes into contact with the product after expansion, which is in most cases the situation, the dew point or water content will be significantly lower. In this case, the atmospheric dew point or ADP is more relevant.

The yearly required energy cost for these drying technologies can represent up to €13,000/100 kW installed compressor power. A relative humidity of a maximum of 10 to 20% is, in most cases, low enough to avoid growing organisms. Using relative humidity in compressed air specification instead of PDP on the temperature scale can contribute to a hygiene-safe and energy-friendly installation.

Microorganisms need a humid environment to grow. The control of the moisture in food is one of the oldest exploited preservation strategies. Food microbiologists generally describe the water requirements of microorganisms in terms of the water activity (aw) of the food or environment.

A specification of pressure dew point with a relative humidity of less than 10% or even less than 20% can be considered food and hygiene safe. Significant energy savings can be achieved when the right dew point within the available drying technologies is selected without jeopardising food safety or creating hazardous hygiene conditions.

Finally, based on the graphic below, it is possible to calculate the specific pressure dew point to achieve a specific relative humidity (aw) in the compressed air at a given ambient temperature. 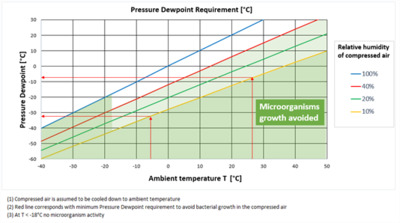 To read more about the growth of microorganisms in compressed air, download the Atlas Copco white paper on the subject.

This meat and fish fraud-detector device is claimed to be 720 times faster and just as accurate...