Chocolate in summer is always problematic - regular chocolate melts at 34°C and it is 38°C in the shade. The chocolate has melted in its packaging before it has even been unwrapped. But Canadian researchers may be coming to our rescue as researchers in the University of Guelph’s Department of Food Science are developing heat-resistant chocolate.

In hot climates, it’s especially difficult to keep chocolate from melting during transportation. “India is the big market that the chocolate companies are going after right now,” says Terri Stortz, a PhD student in food science working with Prof Alejandro Marangoni.

“What we’re aiming for with heat-resistant chocolate is for it to hold its shape or resist deformation at 40°C,” says Stortz. “But the problem is that you still want the fat to melt at 34°C, because body temperature is 37°C. That’s why chocolate is so desirable - and that’s why people like it - because it melts in your mouth.”

Increasing the melting point of the fat can result in chocolate with a waxy texture. To overcome this, researchers are developing a ‘secondary structure’ that would allow the fat to melt while keeping the chocolate together.

“There aren’t any heat-resistant chocolates on the market right now,” says Stortz. The product being developed in the lab would probably cost slightly more than those currently on the market, she says, because of the additive (ethyl cellulose) that helps the chocolate keep its shape. A chemical process replaces some of the hydroxyl groups in cellulose with ethyl groups to make it oil soluble. Ethyl cellulose dissolves in oil at high temperatures; when it cools down, it creates a gel that behaves like solid fat.

The ethyl cellulose interacts with the non-fat solids in chocolate, which include 50% sugar and 20% cocoa solids and milk proteins. The remaining 30% is fat. “The ethyl cellulose is sort of a glue between the solid particles and it creates this network within the chocolate that physically traps the fat,” says Stortz. Although the solids wouldn’t melt at body temperature, she adds, they would dissolve when they came into contact with saliva, because of their solubility in water. 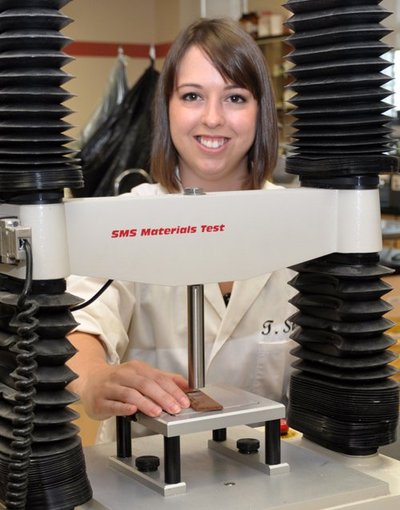 How does heat-resistant chocolate taste? “It tastes a little bit different,” she admits, but most consumers probably wouldn’t notice. Ethyl cellulose typically lacks flavour but it depends on how it’s manufactured. Chocolate can be modified in many ways, she adds, so the slight change in flavour can easily be addressed in the lab.

As for baking applications, she doesn’t recommend using heat-resistant chocolate in recipes that require melted chocolate. “I wouldn’t make a fondue out of it.”