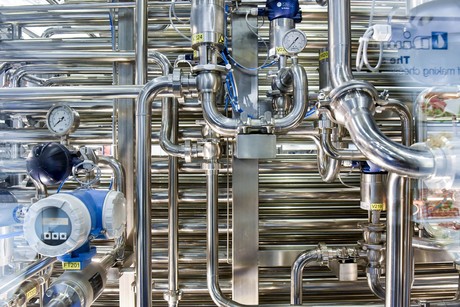 Machines and products will organise, steer and control themselves autonomously in the smart factories that are on the horizon for almost all sectors of the food industry. However, this will not happen unless the networking challenges are solved — and this is where smart sensors will come out to play.

The unmistakable aroma that flows through the Nestlé factory in Schwerin arouses curiosity — and it’s no wonder, because experiencing the production of coffee is something special. Seven production and packing lines on-site are in operation around the clock and these are to be expanded up to 12. In the planned final expansion stage they will produce two billion Dolce Gusto capsules a year in around a dozen different flavours. The Swiss company has invested €210 million — and has equipped the location in Mecklenburg-Vorpommern with state-of-the-art technology.

Each line produces up to 1000 capsules per minute. Cutting-edge sensor and weighing technologies ensure the high filling capacity.

M2M communication in the data cloud

The fact that the process and diagnosis data is passed on from the field level through to the management level is not actually new. Today, the machines are connected with each other in order to ensure the seamless traceability of the entire process chain. The next step is the direct communication between the individual system modules in real time — M2M communication.

Static IT solutions quickly reach their limits here as the intelligent factory comprises decentralised production environments with different components, each of which have their own data sources. Without cloud computing, the growing amounts of data can no longer be processed and evaluated ad hoc.

In future the data cloud is not just to be implemented at management level, but also in the machine room. The central challenge here: synchronising the virtual representation of the production and the ‘real’ production with the representation. Even modern greenfield factories like Nestlé’s don't correspond with the understanding of Industry 4.0 in this aspect.

Also in the maintenance section, say for predictive maintenance, the machines have to independently report back information on their operational state to the maintenance personnel. Intelligent sensor systems take on a key role. In addition to values such as pressure, volumes and temperature, the artificial ‘sensory organs’ also measure oscillations and vibrations. Based on this status data, the production is to monitor itself to a large extent. Yet this alone does not suffice.

Industry 4.0-compatible sensors also have a further interface in addition to outputs for the system control. This allows them to be linked up to cloud services.

In contrast to the rigidly configured and controlled filling lines traditionally used in the beverage industry, the RoboFill 4.0 research project run by the Technical University of Munich, the Fraunhofer IWU Institute and various industrial partner companies aims to create extremely flexible processing stations controlled by products equipped with their own intelligence. This research project aims to provide a new kind of flexible automation concept for the economical filling of customised bottles and containers in batch sizes as small as one bottle.

While production facilities may be networked under the IT pyramid schemes introduced decades ago, these operate in rigid succession and are tied to predefined structures. This also applies to the individual production units, which can neither operate independently nor be networked with cloud-based services without considerable investment of time and effort. Any low-cost method of creating greater flexibility in production can only succeed if the rigid linear mechanical and IT networking of machines used for beverage filling is made smarter and more modular in structure.

The RoboFill 4.0 research project seeks to address this issue by developing an adaptable, flexibly upgradeable filling and material flow concept and a distributed control concept. The concept envisages development of all the plant elements as cyber-physical system components which are capable of continuous communication both with each other and with higher-level systems using network and cloud technologies. This approach reflects the Industry 4.0 paradigm, which envisages the provision of a wide range of new services and offerings designed to allow machines and processes to plan and optimise themselves.

The companies Beckhoff, Krones, Proleit, Yaskawa, Siemens, Till and Zimmer, as well as state brewery Weihenstephan, are the partners on the project. The direct involvement of the consumer occurs via an online portal which enables the compilation of the drinks and the selection of the vessels. A direct inkjet imprint is foreseen for the individual design of the bottles.

Stephan Birle is coordinating the project at the Technical University of Munich. For him the focus lies on a decentralised control concept, which is responsible for the coordination of the system’s modules.

“At the moment there is no dynamic filling concept for medium-sized companies which would allow a format and batch size flexible production for a few bottles through to the unique specimen,” commented Birle.

Machines and process that are equipped with artificial intelligence create the prerequisite for more flexibility in the production. In the case of an ideal typical greenfield project like the coffee capsule factory in Schwerin, modern sensors can be applied from the very beginning. In contrast to the highly productive greenfields in the food industry, the reality is very different in the case of many of the brownfield factories.

In some cases their machines have been in operation for 15 years and rely on a totally different infrastructure than what is demanded in the smart factory. So that these can also produce competitively in the future, they have to be optimised in compliance with Industry 4.0.

The integration of existing machines into smart processes using modern sensors and actuators will thus play a key role at Anuga FoodTec, which will take place from 20–23 March 2018 in Cologne. At this trade fair, visitors will be able to see how real the smart factory is and which challenges are involved in implementing the vision. Exhibitors will be presenting solution packages for greenfield and brownfield systems, which allow the processes to be digitalised in line with the requirements of Industry 4.0.

The trade fair is jointly organised by Koelnmesse and the German Agricultural Society (DLG).

Field robotics revenue to reach US$29 billion by 2030: report

The latest trends on intelligent IoT