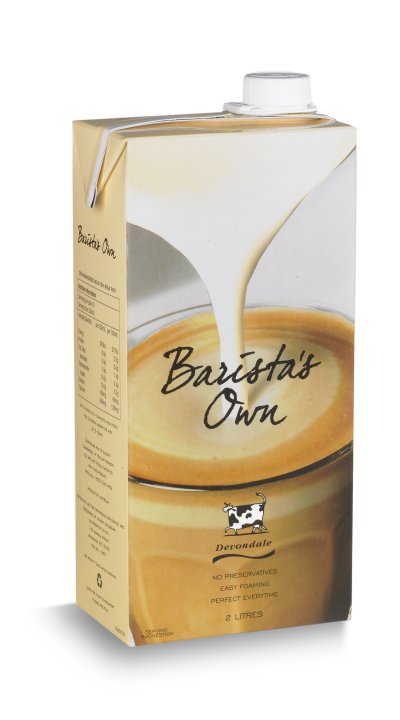 Devondale Barista’s Own brand, in two-litre Tetra Brik aseptic cartons, offers cafes a shelf-stable alternative for about the same cost as pasteurised milk.

Barista’s Own is high-foaming performance milk - and delivers consistently all year round compared to the pasteurised alternatives, which can vary with the seasons.

Each year, cafes around Australia serve some 1.1 billion coffees with foaming milk - using 165 million litres of milk - in cappuccinos, flat whites and lattes. Until now, most have largely relied on pasteurised milk, which occupies expensive refrigeration capacity in the cafe.

Research commissioned into cafe owners’ and consumers’ attitudes to Barista’s Own revealed most operators could see immediate cost benefits in switching to it, from pasteurised milk.

Tetra Pak’s ultra-high-temperature treatment technology delivers milk which will maintain its quality for up to nine months, in storage, without refrigeration.

Unlike pasteurised milk, Barista’s Own requires no refrigeration until a carton is opened, so 70% of cafe operators surveyed expected to save on refrigeration costs, and up to 32% anticipated product wastage reductions.

Also, 79% saw convenience benefits, in terms of fewer milk deliveries and the ability to always have milk in stock.

The challenges of working in a lab