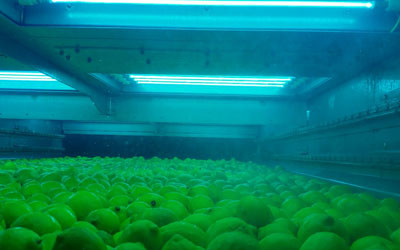 Clēan Works is a Canadian company, but when an unrelated Listeria outbreak of caramel apples in parts of the United States impacted the sales in its apple product business, it decided to put preventive action in place. The company developed a process to clean fresh fruits and vegetables without using water.

When following strict operating procedures, the solution is designed to eliminate contaminants, bacteria and pathogens on food. It kills harmful pathogens and mould, helps prevent contaminants from entering the water system and reduces health risks by making fruits and vegetables safer to consume. It is also claimed to increase shelf life by up to 25%. 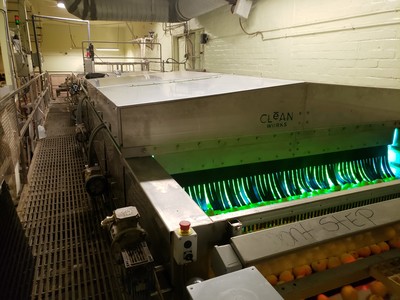 The process uses a combination of ultraviolet light, vaporised hydrogen peroxide and ozone gas to kill up to 99.9% of pathogens, compared to water, which is only 50% effective. The ozone treatment is applied to inactivate microbes (including pathogens) on the surface and subsurface of fresh produce. Produce is introduced into the chamber in field containers, while ozone is generated and forced through the chamber with even distribution. Critical variables (ozone, airflow, humidity, time, temperature) are controlled during decontamination. 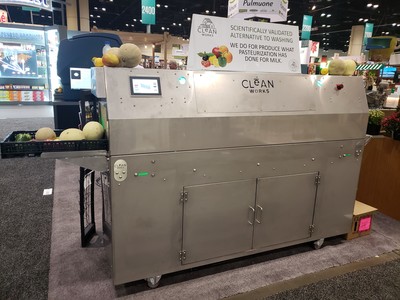 The company has developed two methods: The Clēan Batch Process can decontaminate 9000 lbs (4082 kg) of produce per hour while the Clēan Flow Process can decontaminate up to 50,000 lbs (22,680 kg) of produce per hour, the latter being ideal for larger-volume applications. And the machine used in the process can be customised to work with existing production lines, workflow and capacity for all kinds of produce including grapes, citrus, strawberries, melons, leafy greens, etc.

Clēan Works recently received the Food Safety Innovation Award from the International Association for Food Protection for its patent pending processes for sanitising the surface of produce and other foods without using water.