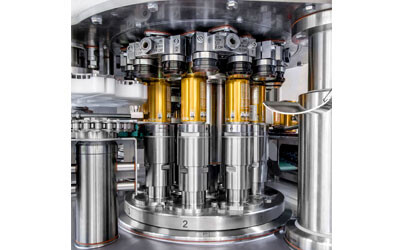 An increasing number of beverages are being filled into cans worldwide, with the diversity of products seeing a similar increase. This is the reason why canners make particularly high demands on flexibility and the hygienic design of machinery.

Thanks to many years of partnership, KHS and Ferrum technical systems are attuned to one another enabling beverage producers to make hygienically designed products. The compact Innofill Can C from KHS, for example, features flexible, taste-neutral filling, among others. This is supplemented by matching seamer systems FC06 and FC08 from Ferrum which have an open design making them easy to clean. Combined, both machines make for an efficient filling process.

The world demand for trend beverages such as hard seltzer, energy drinks and craft beer continues unabated. Here, the can is often the container of choice, said Manfred Härtel, filling technology product manager at KHS. “It’s light, easy to recycle and keeps products fresh for longer with its excellent barrier properties.” This type of container is increasingly being favoured for established beverages such as soft drinks, water and mixed beer beverages.

According to Härtel, this is prompting a good number of beverage filling operations to increase their range in the can segment and fill more and more different products on the same line. “This means higher demands are made of the machine’s flexibility and hygiene,” the KHS filling expert explained. “For the greater the product variety on a line, the greater the risk of contamination and flavour carryover.”

KHS provides two fillers for the can segment: the Innofill Can DVD for the high-performance range and the Innofill Can C designed for small to medium filling quantities. Thanks to a new addition to the series that boosts capacity to up to 60,000 cans per hour, the Innofill Can DVD’s little brother can now be integrated into lines with higher outputs even more effectively. It is also extremely flexible, enabling several different products and formats to be processed on a single line. “The Innofill Can C is distinguished by its fast format changeovers and set-up times. This in turn increases the availability and economy of the system,” is how Härtel described the benefits of this particular filler. 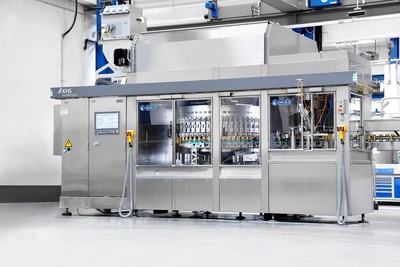 In view of the increasing number of beverage variants being processed, during development special attention was paid to the hygienic machine design and providing protection against flavour carryover. In the product area the filling valves on the KHS can fillers are thus equipped with PTFE expansion joints (Teflon) in place of conventional seals. The sliding seals in the bell guides have also been replaced by Teflon expansion joints to create gapless, hygienic seals. These effectively protect the product from contamination and are easier to clean. Moreover, the electropneumatic lifting and positioning of the bells when sealing cans further contributes to a safe filling process. “Also doing away with water lubrication in the filler carousel area shortens exterior cleaning intervals by up to 20%,” Härtel said.

As an option, the Innofill Can C can also be fitted with a HEPA filter that removes potential bacteria from the air in the machine’s interior. Another option available on request is warm filling. This prevents condensation and thus microbiological contamination such as mould from being formed.

The greatest importance is attached to the hygienic design of all components in both the ferruBasic and FC series with seamers FC06 (15,000 to 45,000 cans per hour) and FC08 (19,000 to 60,000 cans an hour). “When developing our seamers, we consciously went for an open design without cladding. This makes the components easy to clean and the machine readily accessible to operators,” explained Jörn Winkelmann, process engineer and hygiene expert at Ferrum.

In the FC series — compatible with the KHS Innofill Can C — the use of several different angled levels allows condensation and other unwanted liquids to easily run off and not enter the open beverages cans. For the same reason the conveyor segment features regularly spaced openings and the components have an extremely high surface quality to prevent microbiological deposits. Another item of note is the design of the seals that are easy to sanitise as they are installed on the exterior of the machine. The seamer section is made entirely of stainless steel and provides maximum durability even when aggressive cleaning media are used.

For can seamers F12 (35,000 to 105,000 cans per hour) and F18 (51,000 to 150,000 cans an hour) in the ferruBasic series, the Swiss company provides optional hygiene packages whose components are largely installed in the FC series as standard. These include, among other things, installation of an inclined base plate (on the F12 only) and various adaptations to tools that have a positive impact on machine hygiene. Furthermore, since very recently the welded cladding around the upper parts in the standard version has consisted entirely of stainless steel. Ferrum systems F12 and F18, designed for the high-performance range, are therefore a useful addition to the KHS Innofill Can DVD can filler.

In the future, KHS and Ferrum plan to further intensify their cooperation.