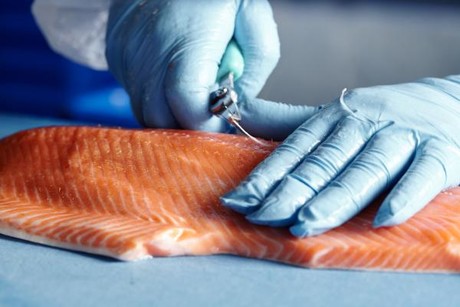 Unlike the ubiquitous Atlantic Salmon, King Salmon, or Chinook, has a finer bone structure and there are more than 30 pin bones in every fillet. Although technologies have been developed for automating pin bone removal from Atlantics, these solutions have not proven suitable for pin boning King Salmon.

New Zealand is the largest producer of King Salmon in the world, according to Brent Keelty, who currently manages the processing operations for around 500,000 fish a year at Mt Cook Alpine Salmon. However, when the company originally visited large equipment manufacturers to develop an automated solution for this species, the volumes were too small to interest them.

With no alternative available to replace the tedious and costly manual task of plucking out each bone, one by one, Mt Cook Alpine Salmon needed to develop a solution to meet the growing demand for bone-out fillets and portions of its King Salmon.

“A year ago we partnered with Scott Technology to research various known technologies around the world and to develop a pathway that could provide some level of automated solution to the manual pinboning task,” said Keelty. “It was the ideas and knowledge displayed by Scott in this preliminary work that gave us confidence to proceed with the current project.”

New Zealand-based Scott Technology has expertise in imaging technologies and robotics in the food sector.

“It was this set of skills we needed to tackle a project like this,” said Keelty. “But we wanted a pragmatic approach that would provide a staged solution along the way to a potentially fully automated solution.”

According to Scott Technology CEO Chris Hopkins: “We love a challenge like this. It’s ingrained in our culture, finding interesting ways to apply technology solutions to business challenges — particularly to help fast-growing New Zealand companies whose products are delivering valuable export revenues for the country.”

In the first instance, an assistive handheld device was developed by Scott Technology for Mt Cook Alpine Salmon.

“We will follow with some more advanced concepts deploying our machine vision technologies to develop a high-resolution 3D view of every fillet and then use algorithms to determine the precise locations of the bones in each fillet. Then the plan is to adapt our robotic automation to remove the bones,” said Hopkins.

Because of the pioneering nature of the project, Mt Cook Alpine Salmon approached Seafood Innovations Ltd to provide financial assistance and was delighted to receive more than half a million dollars of backing for the project.

The pin-boning project has several milestones and is expected to take another 14 months to complete.

This article was republished with permission from Scott.