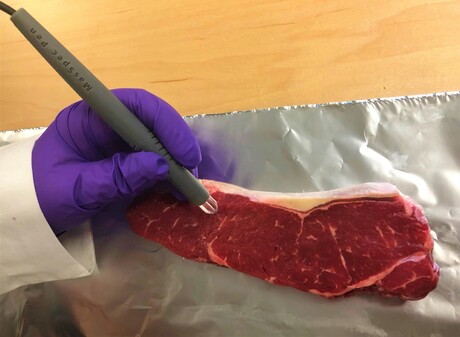 Researchers have developed a technology that enables the identification of common types of meat and fish within 15 seconds.

The researchers said the device’s ability to authenticate the type and purity of meat samples could be used to combat the global problems of food fraud and mislabelling.

The device, which is called a MasSpec Pen, was previously used to gently extract compounds from a material's surface within seconds and then analyse them on a mass spectrometer.

The research report published in the American Chemical Society’s Journal of Agricultural and Food Chemistry analysed the handheld device’s ability to detect meat and fish fraud rapidly and effectively in pure filets and ground products.

Once the device’s tip was pressed against a sample, a 20 μL droplet of solvent was released, extracting sufficient amounts of molecules within three seconds for accurate analysis by mass spectrometry. The scientists said the whole process took 15 seconds, required no pre-processing and the liquid extraction did not harm the samples’ surfaces.

Then the team developed authentication models using the unique patterns of the molecules identified, including carnosine, anserine, succinic acid, xanthine and taurine, to distinguish pure meat types from each other, beef based on feeding habit and among the five fish species. Finally, the researchers applied their models to the analysis of test sets of meats and fish.

For these samples, all models had a 100% accuracy identifying the protein source, which is as good as the current method of polymerase chain reaction (PCR). While being extremely accurate, PCR analysis can take hours to days, and is often performed at off-site labs whereas the MasSpec Pen is approximately 720 times faster.

The researchers said they plan to expand the method to other meat products and integrate the device into a portable mass spectrometer for onsite meat authentication.

To stop microorganism growth, it is necessary to eliminate conditions that permit organism...