Australian Brewery brings back the can

Australians are embracing boutique beer: revenues of craft beer have increased by 6.4% in the past year alone, according to an IBISWorld craft beer production report.

With so many boutique breweries springing up around the country, brewers need to do something different to stand out from the pack. A Sydney-based craft brewery, the Australian Brewery (AB), decided to break from tradition by brewing in cans.

“After extensive research by our brewing team, we have gone with cans because they preserve beer for longer and are less susceptible to oxygen during the sealing process,” said David Ward, AB ambassador. “They also leave a smaller environmental footprint, something that we already pride ourselves on operationally.”

According to AB’s website, there are three key factors that affect beer flavour: light, oxygen and heat. UV light breaks down beer’s delicate aromas and flavours, the brewers say, but cans protect the beer from light.

“Cans are much easier than bottles to fill with beer whilst keeping oxygen levels extremely low,” AB’s website says, explaining how cans reduce oxygen exposure. “We manage around 10 parts per billion or 0.000000001%.”

Cans, however, transmit heat at the same rate as glass bottles, but, as AB’s website optimistically states, “cans beat bottles on two out of three” factors affecting flavour. 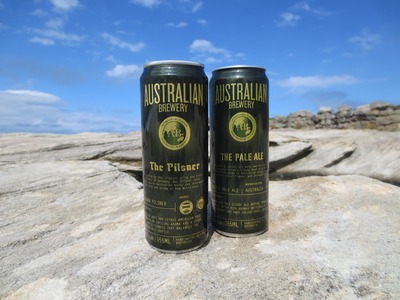 While an empty bottle weighs around 210 g, an empty can weighs just 16 g, AB says. The brewers claim that a 16-pack of cans uses 42% less packaging by weight than the equivalent of glass bottles, and, due to cans being a more efficient use of space, they use around 40% less volume once packaged up and ready for sale. “These add up to a huge energy and resource savings just by using a different method of packaging beer,” the AB website says.

“With glass, this figure goes down to only 30%. And, sadly, much of the glass recycled in Australia actually goes to road-making rather than being made back into bottles. Aluminium is far too valuable for this to happen.

“So cans are lighter, more recyclable, better for the beer, require less energy to transport, less space to store and don’t break into lots of dangerous pieces when dropped.

“So why cans? The real question is why you’d ever use glass.”

AB’s products include a classic pale ale, a classic German-style steam ale, a light Mexican-style lager, a dark larger and a locally sourced apple cider. The brewery also produces a seasonal brew that changes throughout the year.

With the first 250 cases about to leave Australian shores, the Australian Brewery already has its sights set on other export markets.