Researchers discover how to boost sales of ugly foods 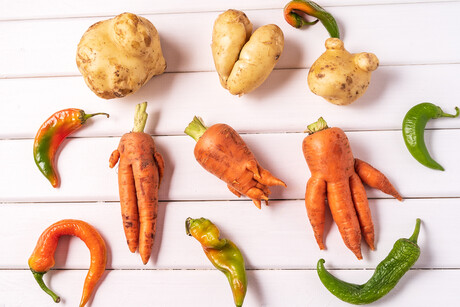 Ugly fruits and vegetables often go unloved and uneaten and end up wasted — but recently published research suggests that changing consumer attitudes to this misshapen produce can improve their sales.

A study was performed by researchers at Ohio State University and Louisiana State University that involved surveying how people viewed so-called ugly vegetables in order to understand how best to get consumers interested in them without relying on heavy discounts. Such discounts are often ineffective at moving the stock into carts and baskets.

The research, published in the Journal of Retailing and Consumer Services, addressed attitudes towards lumpy, bulbous, ugly carrots specifically. It found that when consumers were imparted with the knowledge that unattractive vegetables were of an equal nutritional standard to their more handsome brethren, and that buying these vegetables reduced food waste, they were more willing to pay a decent price for them.

Another interesting finding is that although the individuals surveyed all expressed general disinterest in buying ugly vegetables, if bunches of carrots were sold with a mix of ugly and standard vegetables, in a ratio of 40% ugly to 60% attractive ones, they were more likely to pay full prices. These carrots needed to be sold with their greens still attached and in a farmers’ market environment, but with these criteria met, consumers were happy to pay as much as they would for a bunch of standard carrots.

Other ratios were tested, along with the presence or lack of greenery, combined with alterations to the price, but in the end this 40:60 split was found to be the most ideal. The farmers’ market, with its natural, organic feel, was also essential for the highest, non-judgemental prices to be met.

“So I think then people realise this is what we might expect if we’re getting produce directly from a farmer — there’s more room for imperfection because it’s probably not interpreted as imperfection. It’s interpreted as naturalness.”