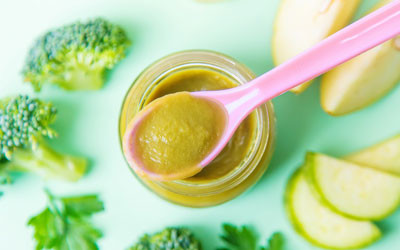 “Other research indicates young kids need to be exposed to the flavour of vegetables to learn to like them. If true, this new work is key because it shows that current commercial products on the market fail to meet this need, as they cover up and hide the flavour of vegetables — even when vegetables are on the ingredient list,” said John Hayes, Director of the Sensory Evaluation Centre in Penn State’s College of Agricultural Sciences.

With vegetables becoming an important but under-consumed part of a healthy diet, there is growing interest in promoting vegetable acceptance and consumption among infants to establish life-long healthy eating patterns. Hayes suggests that many well-meaning parents who want their young children to eat and like dark green vegetables may be fooled by misleading content descriptions.

“If parents don’t stop and taste these foods themselves, the front of the package may lead them to think these products taste like vegetables rather than a fruit puree,” Hayes said.

To develop a liking of vegetables, the flavours from the vegetables must be perceptible within the mixture, said Alyssa Bakke, staff sensory scientist in Penn State’s Department of Food Science.

Bakke explains that the study was an effort to understand the sensory profiles of vegetable-containing, stage-two infant products commercially available in the United States, and how ingredient composition affects flavour profiles. For the study, researchers performed descriptive analyses to quantitatively profile the sensory properties of 21 commercial vegetable-containing infant foods and one prepared in Hayes’ laboratory. Eleven adult panellists received 14.5 hours of training and rated all 22 products in triplicate, for 14 taste, flavour and texture attributes.

The findings, published in Appetite, revealed that the panellists found that products containing fruit were not only sweeter than products that did not contain fruit, but were higher in fruit flavours and lower in vegetable flavours. In general, sensory profiles were driven by the first or majority ingredient in the product. As few products had dark green vegetables as a first ingredient, the dark green vegetable flavour was not prevalent.