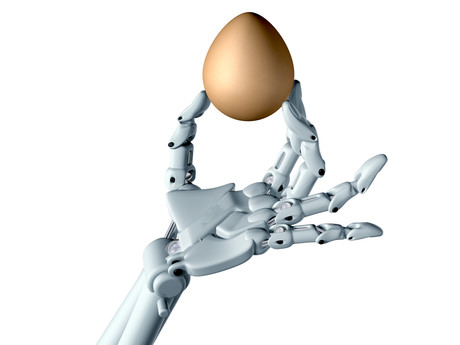 Human hands can manipulate a range of objects through our ability to alter the firmness of our grip. Engineers at the University of Buffalo have developed a two-fingered robot hand that can also alter the firmness of its grip. The robotic hand’s design allows it to absorb energy from impacts during collisions, thus preventing whatever the robot is holding from breaking. This also makes it safer for people to work with and near the machines.

Robotic grippers can be useful in the food packaging industry. “Our robotic gripper mimics the human hand’s ability to adjust the stiffness of the grip. These grippers are designed for collaborative robots that work together with people,” said Ehsan Esfahani, PhD, from the UB School of Engineering and Applied Sciences.

“They’re going to be helpers, so they need to be safe, and variable stiffness grippers help to achieve that goal,” Esfahani said.

A study published online on 10 September in IEEE Transactions on Industrial Electronics demonstrates the robot’s safe design through experiments showing how the gripper’s shock-absorbing features prevent a spaghetti stick from breaking during a collision. In the study, Esfahani and Amirhossein Memar, a former UB PhD candidate in mechanical engineering, also report on the gripper’s safety features.

Magnets are used to enhance the gripper’s versatility. Instead of having two fingers fixed in place, each of the gripper’s fingers contain a magnetic base that sits between two neodymium magnets that repulse, or push against, the finger.

The air gap between the magnets functions as a spring, creating a little give when the hand picks up an object or collides with an external force. The grip stiffness can by adjusted by increasing or decreasing the space between magnets.

To determine the safety of the gripper, engineers place a stick of spaghetti lengthwise between the fingers of the robotic hand. When crashing into a fixed object, the device was able to detect the external force being applied, causing the magnets to adjust their position. This reduced the stiffness of the grip, allowing the gripper to absorb some of the energy from the collision. As a result, the spaghetti stick remained unbroken.

The gripper developed by Esfahani’s team can be attached to commercially available robot arms that are used by many facilities; this could lower the cost of adapting the technology for companies seeking to improve the safety and capabilities of existing machines.

To further develop the robotic hand, Esfahani is launching a start-up company, with licensing technology from UB. Esfahani’s team has received $55,000 (AU$79,992) from the Buffalo Fund: Accelerator — funded by the Innovation Hub, which is administered by UB — to commercialise the gripper. The team aims to refine the current design of the gripper, and aims to explore further advances such as adding a third finger.

Researchers involved in the designing and testing of the gripper include PhD student Sri Sadhan Jujjavarapu and Memar, the co-author of the study in IEEE Transactions on Industrial Electronics.

A government-sponsored study has found that food waste caused by deficiencies in the cold food...

The South Australian dairy industry is creating 'grass to glass' branding that will...

2DBarcodes: the future of food safety for retail?

GS1 Australia has launched the 2DBarcode, an on-pack symbol that provides a range of data...