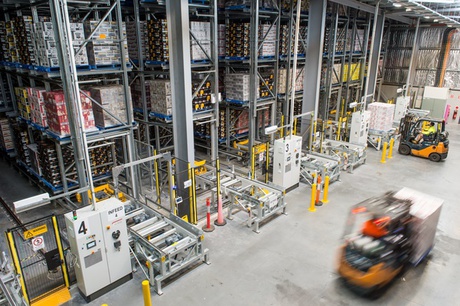 Global alcohol manufacturer Diageo is the owner of brands such as Johnnie Walker, Crown Royal, J&B, Smirnoff, Baileys, Tanqueray and Guinness. In Australia, the company’s primary manufacturing site is in the Sydney suburb of Huntingwood.

Sitting alongside the manufacturing site is Diageo’s new distribution centre (DC), which has consolidated Diageo’s two Sydney facilities into one.

The DC, which has recently been awarded the 2015 Smart Award for Excellence in Manufacturing Supply Chains, has the capacity to store 26,000 pallets of Diageo’s products, more than doubling the facility’s previous capacity of 10,000 pallets.

The DC’s ‘one touch’ supply chain has delivered efficiencies that have enabled Diageo to bring distribution back in-house rather than having to outsource to third-party logistics providers.

“Over the past few years, there has been a general trend among retailers and liquor distributors to reduce the level of stock they are holding and to expect ‘just-in-time’ deliveries,” said Joe Russo, supply director, Diageo Australia. “It was therefore critical for Diageo to upgrade our supply chain to ensure we were capable of meeting our customers’ needs.”

The facility features a Dematic ColbyRACK custom-designed 31 m high-bay storage system. The six-aisle, double-deep, storage system is serviced by six Dematic RapidStore cranes, capable of handling around 110 pallet movements/hour. A key benefit of the system is its ability to immediately transfer stock from production straight into storage for order readiness.