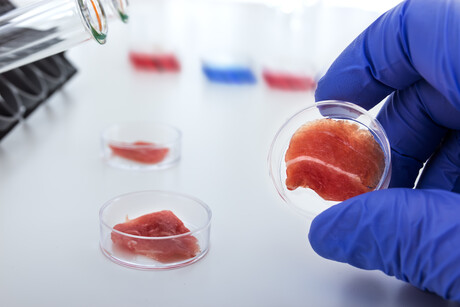 Researchers have developed lab-grown cultured meat that may be used as a steak substitute.

The University of Tokyo research team said its innovation comes in the form of millimetre-scale slabs of bovine contractile muscle.

Tissue engineering of cultured meat is under development at several centres worldwide. However, most biosynthetic meat products are amorphous or granular-like minced meat, lacking the grain and texture of real animal flesh.

“Using techniques developed for regenerative medicine, we succeeded in culturing millimetre-sized chunks of meat wherein alignment of the myotubes help mimic the texture and mouthfeel of steak,” Furuhashi said.

“For this, myoblasts drawn from commercial beef were cultured in hydrogel modules that could be stacked, allowing fusion into larger chunks.”

The researchers then determined the optimal scaffolding and electrical stimulation to promote contractility and anatomical alignment of the muscle tissue to simulate steak meat.

“Breaking force measurements showed that toughness approached that of natural beef over time. Significantly, microbial contamination was undetectable; this has implications for cleanliness, consumer acceptability and shelf life.”

The report says the new technology will also help to address the economic, environmental and ethical concerns with meat production.