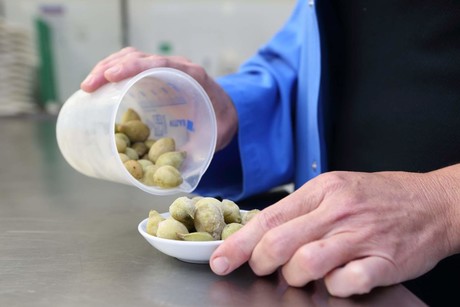 The last few years has seen Australia unlock the potential of native bush foods — particularly the Kakadu plum, which can be a useful preservative that extends the shelf life of foods. This is set to continue with a new Cooperative Research Centre for Developing Northern Australia (CRCNA) project.

The small green fruit, about the size of an olive, is packed with antioxidants and contains strong antibacterial and antimicrobial properties. It is also the world’s highest natural source of vitamin C, with over 50 times the concentration of an orange.

Many consumers are moving away from artificial ingredients and preservatives, and the Kakadu plum may be able to offer a natural alternative, already proving its use in seafood and ready meals.

With funding from the Rural Industries Research and Development Corporation, Associate Professor Yasmina Sultanbawa from UQ’s Queensland Alliance for Agriculture and Food Innovation (QAAFI) has been investigating ways to commercialise indigenous plants since 2010.

“Australia’s Indigenous population has long known the health benefits of native bush food, but the mainstream food industry has only been able to harness some of these benefits recently,” she said.

After screening several plants, she found the Kakadu plum showed the greatest promise against spoilage microorganisms. Kakadu plum extracts were used to extend the shelf life of prawns from the required 14 days up to 21 days. In 2015, its applications were extended to the frozen ready meal industry after they were found to extend the shelf life of frozen food by up to 18–24 months.

Sultanbawa explained, “We developed a puree and a powder that can be added to foods including frozen ready-made meals to extend shelf life up to 18 months, which is a very significant advantage.”

Due to these promising applications, demand for these products is increasing worldwide. Northern Australia’s Kakadu plum industry is predicted to experience further growth in the coming years, with a new CRCNA project that was recently launched at Darwin’s Parliament House.

The project, which has received a $500,000 grant from the Australian Government, aims to help improve the processing, storage and distribution of the plum products, and provide training in harvesting, manufacturing and marketing.

Sultanbawa said, “Demand and growth for Kakadu plum products here and overseas is expected to be around 10% annually, with significant opportunities emerging in the nutraceutical, supplement and pharmaceutical industries, so looking at how we can improve the value chain to better capture these new markets will be a key focus of this research.”

The CRCNA also said the value of the industry is forecast to increase to $10 million in the next five years, and 10% of this growth is expected to come from the project.

The first stage of the T.H.E. Kakadu Plum Project began in 2013, at the request of the Women’s Centre and Traditional Owners in Wadeye, Northern Territory, and has expanded to include other harvesting communities in the Northern Territory and Western Australia’s Kimberley region. It currently processes and sells Kakadu plum fruit, puree and powder products.

This project might result in commercial products such as dehydrated KP products for use in breakfast cereals, high-fibre products and bio-active rich extracts for natural preservation.