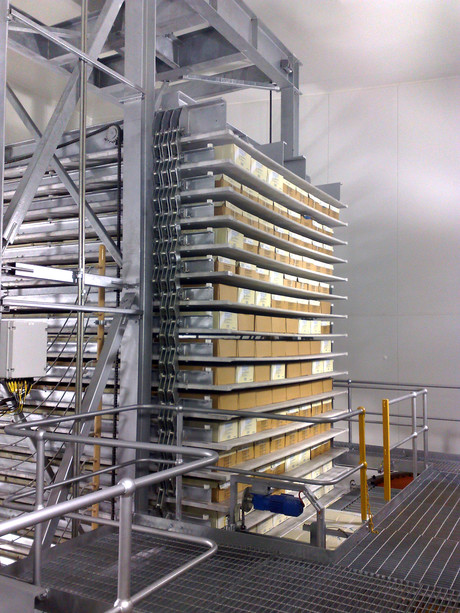 What's driven the massive investment by Australian red meat processors in large-scale plate freezing technology over the past few years? Jon Condon* took a look at a piece of somewhat obscure and perhaps little-appreciated processing technology which in no small way is helping consolidate Australia’s reputation as the world’s best beef exporter, based on quality, consistency and product performance.

Costing up to $10 million each, refrigeration company Milmeq has installed 190 plate freezers in Australia, the majority in meat processing plants. And, in the last three to four years there has been been a sharp rise in installations with all but one going into meat processing applications.

Virtually all of Australia’s top 20 red meat processors now use large-scale plate freezers in their operations with JBS, Teys, NH Foods and Thomas Foods International all heavily committed to the technology.

A large installation was completed at Teys, Beenleigh, in 2016 and more recent projects have gone in at Northern Cooperative Meat Co at Casino, Linley Valley in WA and John Dee near Warwick.

Sheep processing facilities have also been active, including a large installation in 2016 at Fletcher International’s Dubbo mutton and lamb plant.

JBS Dinmore, the largest beef processing plant in the Southern Hemisphere, operates no less than 10 of the large-scale plate freezer units, allowing the facility to freeze up to 800 tonnes of carton meat daily.

The Australian beef industry’s heavy orientation towards export is one reason why plate freezers have been adopted so widely in red meat processing over the past few years.

In contrast, adoption of large-scale plate freezers in competing beef-producing countries overseas has been remarkably low. In the US, for example, about 90% of beef is consumed domestically, and US exports tend to be in higher-end chilled product. This removes some of the need for plate freezer infrastructure. In South America, there is almost no use of plate freezers as yet in beef processing, but the region is seen as a potential growth market for the technology.

One factor that has clearly sparked Australia’s recent massive investment in plate freezers is processor profitability. The high margins enjoyed by processors during 2014–15 — when slaughter cattle were cheap and abundant due to drought conditions and international beef demand exploded with the arrival of new markets like China — has been a big driver in investment.

As bad as conditions are currently for processors, those high-profit years provided a ‘piggy bank’ which is now being re-invested in expensive plant infrastructure like plate freezers to try to stay ahead of international export competition.

Brendan Dever, Milmeq’s business development specialist, has seen a lot of changes in processing since working on the first plate freezer installation in 1986. He agrees that profitability had sparked the rush of installations seen in recent years.

“We saw a real drought in orders for plate freezing systems between around 2009 and 2013,” he said.

That coincided with the global financial crisis, and the lack of processor profitability during the very wet years of 2011–12, when producers held cattle back to build herds, forcing processors to pay higher prices for stock.

“Another factor was the movement in the Australian dollar,” Dever said. “In the years leading up to 2014, quite a lot of our processor clients told us that when the A$ went below US85–90c in value, they would start talking again about buying plate freezers. And that’s exactly what happened.”

What are plate freezers, and why are they so special?

In an insulated room large banks of horizontal freezing plates are positioned within a steel frame. Liquid ammonia circulates through the movable plates, enabling them to rapidly and efficiently cool cartons of meat by transferring heat by conduction from the product to the evaporator. Up to 40 levels of plates, called stations, stacked up to 20 metres high, are included in some systems.

While smaller plate freezing systems have been in use worldwide for decades, they were limited to freezing thin carton blocks, no deeper than 75 mm, typically used for seafood. It was the Australian development of so-called large-scale plate freezers that allowed typical 27 kg meat cartons up to 175 mm deep to be handled that was the catalyst for adoption in beef plants.

The first prototype designed by Milmeq founder Klaus Visser was installed at Tancreds Meatworks at Beaudesert in 1985, under a federal government-backed project designed to deliver greater efficiencies and productivity in red meat processing. The old CSIRO Meat Research Laboratory at Cannon Hill was also heavily involved.

While the original designs were small, manually loaded set-ups handing only 100–200 cartons at a time, modern automatically loaded and unloaded systems range anywhere up to 3000 cartons in capacity. Sometimes multiple systems are installed in the same plant. New innovations, including single-station opening, are providing further attractions for smaller-scale plants and more efficient use.

Weighing up the advantages

Installation of a modern plate freezer facility can cost more than $10 million for the largest applications, including the insulated building itself and automated loading and unloading. But Milmeq says it also does a lot of installations in smaller factories in the $1–$4 million range. Total investment in the technology may have topped $50–$80 million in the past three or four years, one estimate has suggested.

Plate freezers may carry an eye-watering installation cost, but once in operation, offer a host of advantages. The mains ones include:

Cartons handled in a conventional blast freezer can distort and ‘bow’ as the product freezes and expands. This can create problems with stacking and pallet stability, and can compromise the total volume of beef that can be loaded into a shipping container. Cartons frozen in a plate freezer remain absolutely square, like bricks, because of the flat-sided plate compression from both sides. Some processors claim they can load an additional 1.5 tonnes of plate-frozen product into a 20-foot export container, because of better carton shape. Equally at the other end, the product opens up and transports much better.

A typical conventional air-blast freezer will take 48 hours to fully freeze a load of 27 kg meat cartons, meaning twice as much capacity is needed to freeze each day’s kill. In contrast, much more efficient plate freezers work on a 24-hour freezing cycle (many complete the job in 16–20 hours), meaning only half as much capacity is needed for each day’s kill. That, in turn, provides an inventory saving, meaning the processor needs to ‘own’ one day’s less production between slaughtering and market.

In round numbers, a typical plate freezer installation will use about 90 kW of electricity to freeze one tonne of meat. Compare that with even the most modern air-blast style freezers which use about 125 kW/t and it represents an energy saving of around 30%.

There’s been massive investment made in plate freezing technology across the Australian meat processing industry over the past few years, providing our exports with a strong point of difference in performance in international beef markets.

The latest Australian red meat processing installation was commissioned in January 2017 by Queensland export beef processor John Dee for an all-up cost of around $6.5 million.

The John Dee plate freezer installation, supporting two stacks, each with 14 sets of plates, has capacity to freeze 3800 beef cartons per day. While the temperature in the room itself is around -20°C, the liquid ammonia-filled plates themselves get down as low as -40°C. That effectively applies rapid freezing from both the bottom and top sides of the carton at once.

The new plate freezers will be used in conjunction with existing blast tunnels that have been retained at the plant.

“The plate freezer adds an element of flexibility to the ratio of chilled to frozen that we can produce through the plant for our own requirements, as well as those for our service kill customers,” John Dee Director John Hart explained. Service kill clients at the plant currently include Rangers Valley, AA Co, Stockyard and Hancock Prospecting’s new 2GR Wagyu brand.

“Different markets have different requirements. Chilled is still the majority of what we produce and sell, but for example, a lot more frozen product is going to China,” Hart said.

“If we or our service kill customers get a lot more orders that way, we now have the capacity to quickly and efficiently freeze down that product.”

In the case of the first volumes of beef under Hancock Prospecting’s new 2GR Wagyu brand produced recently, the product was frozen at the Chinese customer’s request, to make it easier to manage under the still-developing cold chain systems in place in the China market. In simple terms, frozen product can often get to the end user in China more reliably than chilled.

Hart said the new plate freezing systems could freeze-down product in 16–20 hours, depending on the item in the carton — roughly the same time as it takes to chill beef to required core temperatures. This made it much easier to get orders and shipments together from specific runs of cattle, without having to wait for the freezing process to complete.

“Previously, freezing capacity and performance was one of the plant’s limiting factors,” he said.

“And from an energy perspective, the plate freezers use 30% less energy than conventional blast tunnels, because they do not run big fans. Refrigeration is one of the major costs in running a processing operation.”

The quality of product produced from rapid plate freezing was also better, eliminating problems like dark rings that could occur with slow freezing.

*Jon Condon is the founder and publisher of national online beef industry news and information service Beef Central. As one of Australia’s most experienced and respected agricultural journalists and commentators, he has been part of the fabric of the nation’s beef industry for his entire life. He spent his early life in the Northern Territory, where his family built and operated a successful export beef processing plant at Katherine, and an extensive cattle property in the East Kimberley. For the past 30 years he has specialised in reporting on the red meat and livestock industries, firstly in print with Fairfax, and for the past six years as proprietor and publisher of Beef Central and companion websites Sheep Central and Grain Central. He has authored two books on beef industry affairs — both histories — based on the Australian lotfeeding industry and Stanbroke Pastoral Company.

Food plant managers can retrofit most motors with smart sensors to bring their plants into the...

Getting flooring right in a brewery

Chemical resistance is essential in breweries in order to maintain the facility's...