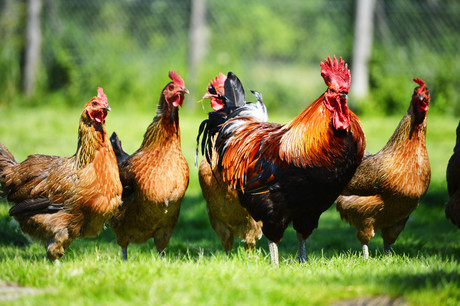 “The largest single-site investment ever made in the Canadian food sector” and “the single most technologically advanced facility of its kind in the world” are claims about the new poultry processing plant that Maple Leaf Foods is building in London, Ontario.

Maple Leaf Foods was Canada’s fourth-biggest food processor by revenue last year. The packaged meat company is headed by Michael McCain, who is one of the children of the founder of McCain Foods — so the food industry really runs in his blood. Headquartered in Mississauga, Ontario, Maple Leaf employs around 11,500 people and does business in Canada, the US and Asia.

With chicken being the most consumed and fastest growing meat protein in Canada, and demand high for chicken raised without antibiotics and halal chicken products, the future for Maple Leaf’s chicken business is looking firm. However, McCain told the Financial Post: “The supply chain we have today in our poultry business, which is endemic across the entire supply chain in Canada, I think, is sub-scale and inefficient. It’s 50 to 60 years old, or more in some cases, and does not deploy the latest technologies. We know that while it’s a profitable category for us today, it’s not long-term secure.” Hence the new $660-million fresh-poultry facility.

The 60,000 m2 facility is expected to be one of the most technologically advanced poultry-processing plants in the world, with leading-edge food safety, environmental and animal welfare processes and technologies.

Construction at the London site is expected to begin in the Northern-Hemisphere spring of 2019, with start-up planned to commence in the second quarter of 2021. The new plant will initially support over 1450 direct full- and part-time jobs, with additional job growth as production volumes increase over time.

Construction is expected to generate approximately 300 jobs, with almost 85% of project expenditures supporting domestic construction and installation contractors. The facility is expected to create a further 1400 indirect jobs in the supplies and services sector and generate an estimated $1.2 billion of annual economic activity once it is fully operational.

Production from the company’s three sub-scale and ageing plants in Ontario will eventually be consolidated into the new facility. The company’s plant in St. Marys is expected to close by late 2021, while its plants in Toronto and Brampton are expected to close by mid-late 2022. Each of these plants is 50 to 60 years old, with location, footprint and infrastructure constraints that limit opportunities to expand and modernise to meet growing market demand.

Maple Leaf will invest an initial $605.5 million into the plant, while $34.5 million will come from the Ontario government and an additional $28 million from the Canadian government. As part of the federal funding agreement, Maple Leaf will invest a further $5 million over the next five years on projects that accelerate adoption of advanced manufacturing and production technologies and support the company’s goal to reduce its environmental footprint by 50% by 2025.

To improve safety during food processing, a durable coating has been developed to prevent...