Quality in the box 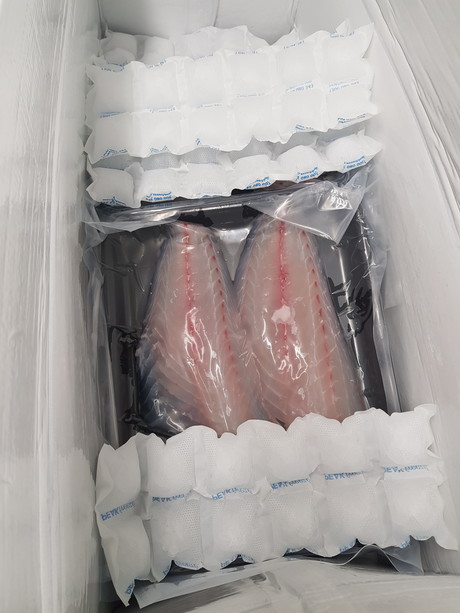 When polystyrene proved a barrier to better marketing their premium reef fish, Queensland’s Tom and Kath Long took a leap of faith to develop an alternative packaging system — a re-usable, customisable packaging that initial tests show has a better thermal performance than polystyrene.

Queensland fishers Tom and Kath Long have developed a new packaging system to ensure their premium reef fish arrive at their destination in peak condition. And their innovation could well transform seafood supply chain packaging around the world.

The Longs are small-scale operators based at Kurrimine Beach on Queensland’s north coast, midway between Townsville and Cairns. Tom line-fishes for some of the highly sought after tropical species the region has to offer — Red Emperor, Goldband Snapper and Rosy Snapper, to name a few. Kath works in the processing room and is responsible for marketing and promotion; they share the office work.

They also both have their day jobs. Tom is a plumber and Kath is a teacher at the local primary school. But it’s the fishing business that has taken hold of their hearts and is consuming an increasingly large portion of their time.

Their business, TomKat Line Fish, is based on two underlying principles: a premium product and environmentally responsible practices. Tackling the challenge of polystyrene, a hard to recycle and often single-use plastic, addresses both of these issues. 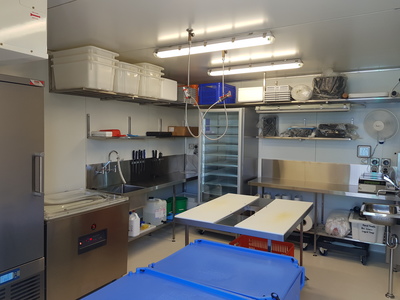 The specific driver in developing new packaging is their signature fish, the Red Emperor.

The minimum catch size for a Red Emperor in the Queensland Coral Reef Fin Fishery is 55 cm. The maximum size of a polystyrene box is 53 cm. For Tom this meant his prized catch had to be bent to fit the box when he sent the fish, whole, to chefs at Sydney’s top restaurants. It wasn’t a good look.

“Because we fish along the continental shelf, a lot of our other fish such as the Goldband and Rosy Snapper are also larger than those from the inshore fishery. So it’s been an ongoing problem for us,” Tom said.

This quandary has led the Longs to develop the TomKat KoolPak. The initial prototype combined existing materials in a new way to provide re-usable, customisable packaging that initial tests show has a better thermal performance than polystyrene.

Kath said they’ve continued to refine the prototype using high-grade plastics. “We wanted to ensure 100% recyclability by our manufacturers, embracing the ‘cradle to cradle’ principles of sustainability.”

The Longs were among the participants in a Fish-X workshop in Brisbane in 2018, part of an innovation program that X-Lab Ventures runs for the Fisheries Research and Development Corporation (FRDC). The Longs’ original intention was to improve their marketing, having invested heavily in realising their seafood ambitions during the past seven years.

When they first established the business in 2012 they sold fish into the wholesale market in Cairns. But in 2016 they established their own processing facility at Kurrimine Beach to achieve greater control over product quality.

“We produce high-quality product using dry-filleting techniques. Fillets are portioned, vacuum sealed and blast frozen, locking in that premium freshness,” Tom said. “We also supply premium chilled product to clients who appreciate it, such as Josh Niland, who operates The Fish Butchery and Saint Peter restaurant in Sydney.” 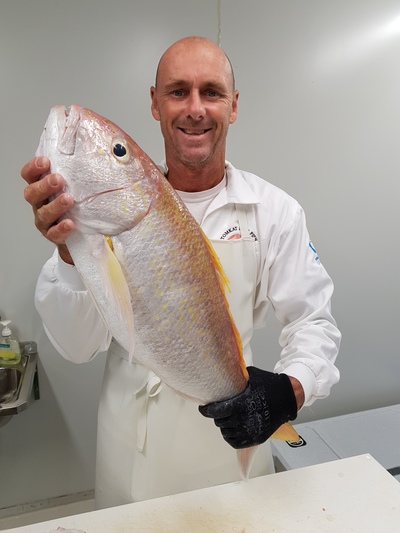 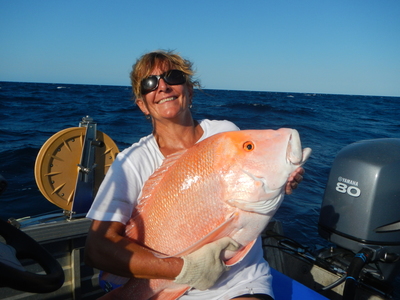 New skills and a need to innovate

Tom said the Fish-X workshop introduced them to a host of business practices they weren’t familiar with, including ‘pitching’ and critically analysing their operations for continuous improvement. It supported their marketing, which is based on provenance and premium quality.

But the underlying polystyrene box issue remained a barrier to better business processes. The Longs have used data loggers in their deliveries, which are undertaken by a freight company and involve a two-hour drive north to Cairns and airfreight to Sydney.

“When you put a data logger in, you realise how long your delivery is actually out of the cold chain — when it’s unloaded, weighed, sits on the tarmac at Cairns, is on the plane and again on the tarmac at Sydney. Even within the cold chain, there are temperature rises. It really hits home how important a thermally insulated container is,” Tom said.

Following the Fish-X workshop the Longs joined the Fish-X business mentoring program, and also received an FRDC bursary to attend the Global Seafood Expo in Brussels in 2018.

With more than 1000 exhibitors at the expo Tom searched the trade hall for fish processing technologies. Kath went looking specifically for alternatives to polystyrene. “I went from stall to stall, looking for the magic box for our fish to go in. But there wasn’t one,” Kath said.

She did find a couple of things, including a flat-packable plastic box that, while good, wasn’t quite good enough for the out-of-cold-chain challenges they needed to address. But she did like the way the box could be folded and unfolded, stored flat and re-used. “So we looked for a way to make it better,” she said.

Their own design is now ‘patent pending’ and involves triple layer protection for the seafood inside. After developing a prototype they conducted a trial run, complete with data loggers, sending fish to an FRDC sponsored stand at the Sydney LollaProducer event in June last year, an annual event that brings together primary producers and chefs.

“The fish looked great when they arrived and the data loggers gave proof of concept and that is where the journey really kicked off,” Tom said.

“We are always on a journey, and we are always going to do good things with our fish. But the Fish-X program and the support from the FRDC has been instrumental in helping us get to where we are today.

“Without that, we wouldn’t have developed the container; we wouldn’t be on the verge of launching this product. I think the real value of that assistance is still to be realised.”

Their prototype was used in December to airfreight chilled and frozen product to the Queensland Department of Agriculture and Fisheries food technology centre in Brisbane, part of an FRDC-funded chilled versus frozen product research project.

DAF’s lead researcher Sue Poole and the chefs involved in the tasting trial were all impressed with the quality of the fillets that came from the transport consignment.

The Longs are now on the verge of commercialising the TomKat KoolPak, with final testing based on a 1000-box commercial trial scheduled to begin in April. There is widespread interest from the Australian seafood industry and conservation groups such as WWF. The trial will involve limited numbers of containers complete with data loggers supplied to a broad cross-section of industry leaders.

The rock lobster industry is also interested. Live lobsters are currently packed into polystyrene for transport, and although chilled to the point of sedation, polystyrene is noisy and can stress the cargo. Acoustically as well as thermally, the TomKat KoolPak may also prove a better choice for live exports.

Tom said they are particularly pleased to have award winning chef Josh Niland support the project. Josh has pioneered the dry ageing of fish in Australia, with an ethos of using the whole fish, and using lesser-known species, which has seen his restaurant Saint Peter shortlisted for The Ethical Thinking Award in the World Restaurant awards, Paris. His focus on sustainability aligns strongly with the Longs’ approach.

“As a purchaser of our fish, Josh knows firsthand the problem around polystyrene packaging,” Tom said. “He is a huge supporter of our KoolPak, and we look forward to the next delivery of fish to him in one.”

Tom and Kath were among the 12 businesses sharing $5.4 million in funding in the latest round of Liberal National Government’s Accelerating Commercialisation grants. Part of the government’s Entrepreneurs’ Programme, each of the grants will be matched by industry funding from the businesses and Tom and Kath will use this to help commercialise and market their sustainable packaging solution for transporting seafood.

Accelerating Commercialisation grant applications can be lodged at any time for access to expert advice and matched funding grants of up to $1 million. These grants cover eligible commercialisation costs and help take products to market. 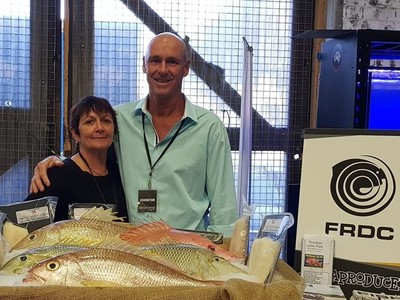 Making a successful application and becoming a successful start-up is not easy but help is at hand. Fish-X is a remote mentor program, designed to help innovators in the Australian Fishing Industry build a Blue Economy of the future. Fish-X provides a pathway for those who want to take innovative ideas that solve big industry challenges and turn them into reality by giving participants the tools and supportive environment they need to succeed.

Worldwide manufacturers have struggled to come up with an alternative to polystyrene that can match its thermal properties, leaving many in the seafood sector wary of new products. The Longs hope they have finally cracked the formula, both for their own seafood and for others.

“There’s a global push against single-use polystyrene. And wherever we went when we travelled in Europe we saw the same thing: polystyrene being used, small sections breaking off and making their way into drains or waterways. It was the same issue we have here, but on a much wider scale.

“If we could replace 10 million polystyrene boxes with our TomKat KoolPak (approximate yearly usage in Australia) that would be a tremendous boost to the Australian manufacturing and recycling industry. But it still represents only about 2% of the world’s volume of single-use polystyrene,” Tom said.

For more information on the TomKat KoolPak, contact Tom and Kath at tomkatlinefish@bigpond.com. 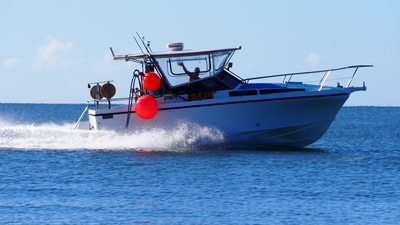 A Melbourne-based wine store recently launched with a sustainable point of difference, opting for...

Nestlé in the Loop of the circular economy

Nestlé has announced it will make reusable containers for some of its brands as the...

Flavonoids present in cherries and apples could prove to be extremely valuable.

Pancreatic cancer cells' addiction could be their downfall