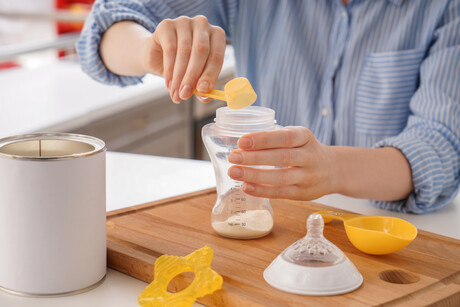 It is safe to say that melamine is an unwanted guest at the dinner table.

Melamine is a small, nitrogen-rich molecule that is typically found in industrial manufacturing environments. Commonly used in the production of fertilizers and plastics, melamine is a compound that is certainly not fit for human consumption1.

Yet, despite this fact, there have been numerous deaths involving trace melamine in food and dairy products over the past few decades.

The reason for this is rooted in an effort to make more profit from consumables by replacing protein with melamine.

When it was discovered that melamine could be used to imitate protein levels in a food product, some manufacturers took advantage of this — despite the illegality of such practice. A harsh example is the 2008 Chinese infant milk scandal.

Melamine alone is of low toxicity; however, studies have suggested that in combination with cyanuric acid, crystallization forms that can cause kidney malfunction.2 Cyanuric acid (CAS No 108-80-5) is a structural analogue of melamine. It may be found as an impurity of melamine, or it can be a by-product of melamine preparation.2

In 2008, it was found that more than 13,000 young children had consumed melamine-contaminated milk products and were reported to have developed sickness related to kidney stones and renal failure, resulting in death. At the time, there were no traditional methods for testing for melamine in milk products because the fact was, there should never be a reason to test for it. Meanwhile in China, at the heart of the manufacturing world, this became a widespread contamination crisis that forced companies to seek testing methods for melamine urgently.3,4

According to industry expert Jeff Rohrer, Thermo Fisher Scientific was a first responder to this crisis, designing and developing efficient and accurate testing methods for melamine in milk products, and bringing them to market in less than three months.

Scientists working for or with Jeff visited factories in and around Shanghai during the crisis to implement testing and training at factories.

“I was managing a group in Shanghai when this became a crisis. We went to work developing the testing methods. We designed two High-Performance Liquid Chromatography (HPLC) methods and one Ion Chromatography (IC) method, and they went right onto the production floor of the local factories,” explains Jeff. “We had knowledge of sample preparation for milk from other ion chromatography work we had done. We knew the compound was relatively easy to detect. To test for melamine in milk, you must get rid of the protein, sugars, and fats first. This required us to develop different modes of removing the compounds. After you remove everything, you are left with a clear liquid.”

All three methods detect melamine by absorbing UV light and can be hooked up to a Mass Spectrometer, if needed. Charles Yang, Senior Marketing Specialist for the Environmental, Food and Beverage sectors at Thermo Fisher Scientific, elaborates on this.

“Most advanced food testing labs employ mass spectrometry-based methods, particularly liquid chromatography-mass spectrometry (LC-MS), for detecting levels of melamine,” says Charles. “The ‘dilute-and-shoot’ approach is when the milk products are dissolved in diluted acid, followed by protein precipitation with acetonitrile. In a second approach, which is more time-consuming and labour-intensive, the solid phase extraction (SPE) removes the interferences and enriches the sample melamine for more sensitive detection.”

Prior to the crisis in China, there had been no standard for setting the Maximum Residue Limit (MRL) for melamine in countries around the world. Whereas today, Jeff notes the United States Food and Drug Administration (US FDA) has established a tolerable daily intake (TDI) of 0.63 mg per kg of body weight per day1.

“The accuracy of our melamine trace testing is well-established — they are more sensitive than other testing methods on the market and can be highly automated,” Jeff concludes.

Thermo Fisher Scientific has proven its ability to deliver support and solutions when they are needed. Their instrument and consumable product range offers applications and methods that are fitted to the purpose of melamine analysis.

If you require help with any of your analyses, get in touch with one of our chromatography specialists.

A reliable, cost-effective wastewater solution is vital during the pandemic

Many fresh and packaged food businesses have increased production to meet demand, putting...