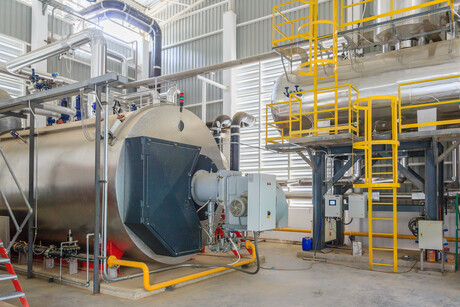 Steam is commonly used for process heating. Typically, saturated steam is produced in shell and tube (fire tube) boilers. Its advantages are obvious: the heat content is high, and temperature can be regulated by controlling pressure. When looking at the properties of saturated steam, it can be seen exactly at the border line between liquid water and gaseous steam (vapour). 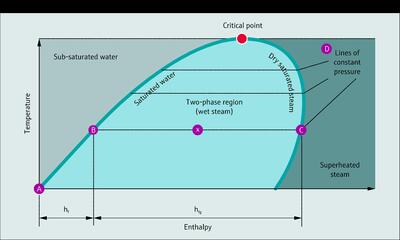 Heat losses in steam piping, e.g. because of lack of isolation, will lead to a reduced dryness fraction. This wet steam can lead to the following problems:

If the wet steam is a result of carry-over from the boiler itself, stress corrosion cracking may result. Wet steam, however, is also an issue at the point of end-use. If the condensate trap at the outlet of a boiler does not work, the heat exchanger may drown, thus reducing the heat transfer efficiency drastically.

Another potential problem lies in underperforming separator equipment for producing saturated dry steam which may also result in wet steam and reduced efficiency. All these examples show: wet steam can occur anywhere in a process heating system — even if it is assumed that the steam has been superheated! Over the recent years, more and more customers have expressed their concerns about these issues to Endress+Hauser. The most asked question was “How can I find out if the steam is wet?”

Basic research — an investment in the future

The above repeated questions led Endress+Hauser to invest in a steam rig together with the University of Applied Sciences and Arts/Northwestern Switzerland in Windisch. This steam rig allowed us to create steam at different dryness levels and to investigate the effect of moisture in the steam on our new Proline vortex flowmeters. Dryness fractions between 80 and 100% can be generated for line sizes DN 25 (1″), DN 40 (1½″), DN 50 (2″), DN 80 (3″) and DN 100 (4″). Steam pressures of up to 10 bar g can be achieved. The wet steam was created in different ways by injecting water as a “river flow”, “mist flow” and by means of a cooling pipe. In all three cases, the investigations showed that in horizontal pipelines increasingly wet steam first formed “channel flow” at the bottom of the pipeline and then “smeared” up along the pipeline walls, independent of how the liquid water was injected.

Fig. 4: Steam research facility from Endress+Hauser and the University of Applied Sciences and Arts/Northwestern Switzerland in Windisch.

Further research showed that when installing a Prowirl 200 vortex flowmeter into a horizontal pipeline with the electronics head mounted in the “6 o’clock position”, the “river flow” mentioned above had an influence on the sensor signal. Its kurtosis, i.e. the steepness of the amplitude, changes because of the changing state of the fluid. This simple fact has an exciting result: the meter can “decide” if the steam present in the pipe is dry or wet. The device even allows a value to be entered for the steam quality, below which the device will give a “steam quality” warning. 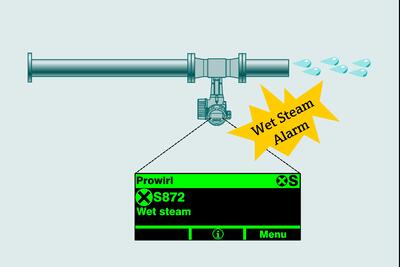 The best solution for steam applications

The multivariable Prowirl vortex flowmeter is now optionally available with “wet steam detection”. We have already received positive feedback from several customers that this feature will strengthen Prowirl’s position as the best solution available for steam measurement in process heating systems — increasing both safety and efficiency.

This in-person event will bring together operations, maintenance, engineering and technology...

Learn about treating or using the correct technology for compressed air that is in direct or...

Cryogenic freezing offers benefits for food processers who can understand its intricacies.