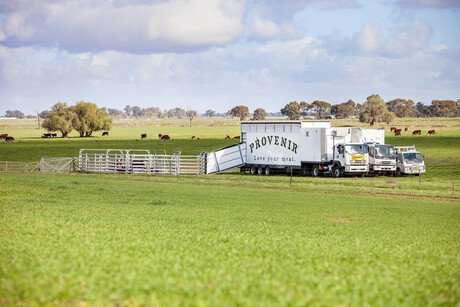 Australian Red Meat company Provenir has been granted a licence by the Victorian Food Safety Authority PrimeSafe to operate a vehicle based abattoir — which is claimed as a first for Victoria.

Provenir’s mobile abattoir is designed to eliminate the stress to animals associated with live transport prior to processing. By processing livestock on farm, at the point of production, it can provide a sustainable production system.

The company launched in June 2019 following licensure by the NSW Food Authority to operate a mobile on-farm abattoir. It has since been restricted to processing on NSW farms until recently, when the company was granted a Licence to Operate a Vehicle Based Abattoir in Victoria.

Provenir co-founder and farmer Chris Balazs has his cattle processed on his property SageFarm, at Bannockburn, located in the Golden Plains Shire of Victoria. Consumer support for on-farm processed meat has been strong, demonstrated through a pre-launch crowdfunding campaign in which the company raised over $68,000, securing more than 220 pre-sales of its meat packs.

“As a farmer myself, I hate loading my livestock onto the back of a truck. I work so hard to get them in top condition only to risk losing it all to a bad trip. I always knew there had to be a better way. Mobile processing makes so much sense, for farmers, for livestock and for consumers. It’s the way of the future for red meat in Australia,” Balazs said.

Provenir’s on-farm processed beef has won awards and also been praised by chefs including Mark LaBrooy of Three Blue Ducks restaurant group and Neil Perry of Rockpool Bar and Grill.

The company is seeking expressions of interest from Victorian grass-fed cattle farmers, particularly those practising regenerative farming and turning off 100+ head per year, as the company prepares to commence on-farm processing in Victoria.