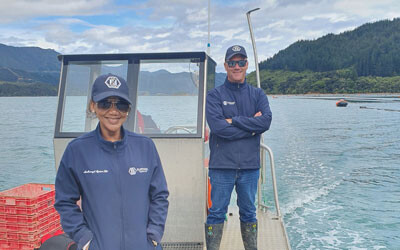 FlipFarm Systems in New Zealand has received the 2021 Global Aquaculture Innovation Award for its oyster farm technology. The company’s semi-automated oyster farming methods were recognised for their adaptability and efficiency. The company competed against 39 other applicants from two dozen countries and was selected by an audience vote.

FlipFarm Managing Director Aaron Pannell and Owner/Operator of Marlborough Oysters is delighted with the win, which further cements the company on the international stage.

“Our FlipFarm technology officially launched two years ago and is used by more than 70 oyster farmers in 12 countries worldwide,” said Pannell, who runs the business with his wife, Debbie.

“While carrying out the day-to-day operations at our oyster farming business, Marlborough Oysters, we identified the need for improved technology. We needed to evolve the growing process from the traditional system of plastic oyster growing bags clipped to growing lines with webbing lanyards.”

The former system proved ineffective and the equipment would wear out and during stormy weather they would lose hundreds of oyster growing bags. This not only impacted their bottom line, and negatively impacted the environment, but meant staff were regularly called on to make repairs and retrieve lost equipment.

Aaron knew there must be a better way, so he applied his can-do attitude and marine farming experience to design FlipFarm — harvesting equipment which would bring a new level of efficiency to oyster farming.

Instead of using the mesh bags, the new system uses rigid oyster baskets that are attached to a semi-automated backbone system. This backbone rolls onto its side to allow for the oysters growing in these baskets to be harvested by crew on a boat.

The automated nature of the system means that the harvesting process can be performed without intense physical labour, which the company says means a wider range of people are able to be part of the oyster harvesting process. It also produces less waste, as the system doesn’t break as often and is thus more environmentally friendly.

The system also makes biofouling control more efficient, as whole surfaces of the baskets and the oysters in them can be flipped up to dry — killing biofouling and unwanted pests like the predatory flatworms that try to wriggle their way between the shells of feeding oysters.

“Many people have been involved in developing and implementing the FlipFarm System. Our dedicated team has worked with us on bringing our ideas to life. We couldn’t think of anywhere better in the world than Marlborough to be growing oysters and launch this world-leading technology,” said co-founder Debbie Pannell.

“We look forward to continuing our mission to deliver world-class aquaculture solutions to the most sustainable and exciting industry in the world!”