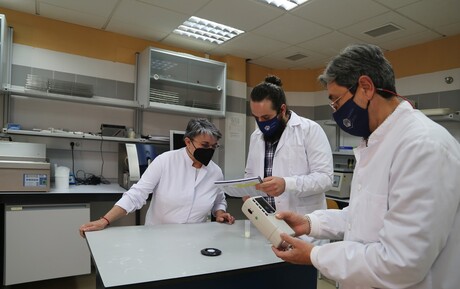 Currently, a relatively large amount of sheep’s milk is needed to produce cheese. So scientists are looking for ways to increase its yield — to obtain more cheese using less milk.

Immersed in this task, a team from the Department of Animal Production at the University of Cordoba, led by Professor Ana Garzón, has collaborated with the University of Leon in the search for genetic parameters affecting the cheese production of milk from Churra sheep, one of the oldest and most rustic breeds on the Iberian Peninsula.

After analysing traits related to rennet and milk properties (pH, milk yield, fat and protein content) in a sample of more than 1000 sheep, the research team found a low to moderate heritability of these traits, suggesting that the process can be improved upon through genetic selection.

The scientists also found the need to consider milk pH levels at the beginning of the coagulation process. An analysis showed an increase in quality of the milk’s cheesemaking capacity after it was monitored to sit within certain levels.

The report, titled ‘Estimation of genetic parameters for cheese-making traits in Spanish Churra sheep’, was published in The Journal of Dairy Science.

A report has revealed energy wastage costs with compressed air systems and highlights the...

Dairy maker to reset milk to net zero by 2035

From the dairy farm to plant and logistics, Finnish dairy manufacturer Valio plans to reduce the...