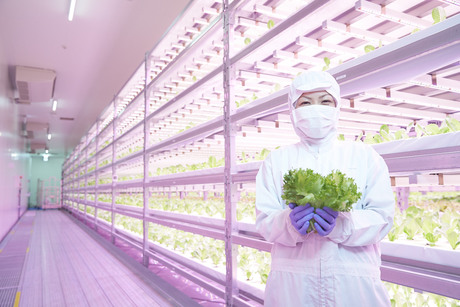 A vertical farm is a fully controlled facility where vegetables and herbs are grown in stacked layers without the use of daylight. Growing conditions are carefully controlled using tailored growth recipes which specify light, temperature, water, CO2 and the best growing medium. Vertical farms enable producers to meet the growing demand for safe, fresh food in countries like Japan where space is at a premium.

After a trial starting in March 2015 at its Fuji Farm with a total floor area of 1851 m2 — one of the largest completely closed-environment, vertical farms in the world using horticultural LED lighting — Innovatus now produces 12,000 heads of lettuce/day.

“The trial using Philips GreenPower LED production module has allowed us to grow five varieties of lettuces, mainly frilled lettuce, green leaf and romaine that are of a consistent quality and locally produced, using only a fraction of the water and compared to lettuces grown in open fields,” said Hitoshi Wada, director at Innovatus.

The Innovatus lettuces arrive in Tokyo supermarkets just two hours after shipment from the farm and do not require washing prior to consumption.

Meanwhile, processed foods manufacturer Delicious Cook is using the vertical farm technology to grow its own produce. It has created a city farm in the urbanised Kanto region of Japan, using Philips’ GreenPower LED production module in three layers in a total cultivation area of roughly 80 m2 to grow relatively uncommon herbs, including edible chrysanthemums and coriander for the company’s processed foods.

Spatial distancing rules: are they insufficient for health workers?