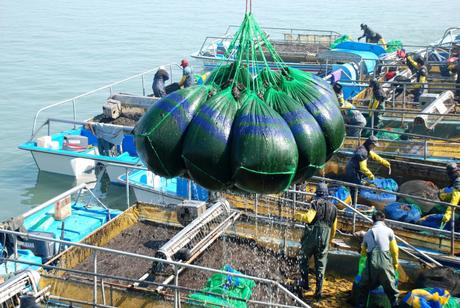 The seaweed industry is expanding at a rapid rate, driven by new and valuable uses for the crop — from food and fertiliser to pharmaceuticals and industrial gels. The annual harvest is currently 25 million metric tons, valued at US$6.4 billion in 2014.

But such growth comes with risks, and experts are now urging the industry to take heed of the lessons learned in both agriculture and fish farming in order to avoid the potential pitfalls.

Drawing on the expertise of 21 institutions worldwide, UN University’s Canadian-based Institute for Water, Environment and Health and the Scottish Association for Marine Science (SAMS) have published policy advice to the seaweed industry, to help it avoid expensive mistakes and pursue best practices, backed by relevant case studies involving crops like bananas and shrimp.

The upside of growth

From its beginnings in late 1950s, the seaweed industry now offers sustainable employment in developing and emerging economies, notably China (which produces over half of the global total of seaweed — 12.8 million tonnes) and Indonesia (27% of global production — 6.5 million tonnes). Other major producers include the Republic of Korea and the Philippines.

The industry’s development has brought many positives. As a relatively environmentally benign type of aquaculture activity, it fills a gap left by stagnating fisheries, and has been actively promoted by government initiatives in developing countries where communities have reduced access to alternative livelihoods or are involved in destructive fishing methods like dynamite fishing.

Increasingly, seaweed cultivation is also being integrated with intensive fish farming to provide nursery grounds for juvenile commercial fish and crustaceans, and to filter undesired nutrients, improve the marine environment and reduce eutrophication.

Indirectly, seaweed farming has reduced overfishing in many regions, providing coastal communities with an alternative livelihood. In some places, women have become economically active for the first time.

Most seaweed produced is used for human consumption with much of the remainder used largely as a nutritious additive to animal feed or as a fertiliser.

In the last decade, a growing demand for seaweed in pharmaceuticals, nutraceuticals and antimicrobial products, as well as biotechnological applications, has spurred a rapid expansion in its cultivation.

Today, seaweed is used in some toothpastes, skincare products and cosmetics, paints and several industrial products, including adhesives, dyes and gels. Seaweed is also used in landscaping or to combat beach erosion.

However, the policy authors warn of unforeseen ecological and societal consequences from the rapid expansion of any industry, urging industry leaders to focus on a range of issues, including:

“Rapidly increasing seaweed cultivation globally will be good for commerce and open up a range of new products, but we must also try to minimise any negative effects that this industry may have on coastal marine environments. The seaweed industry must be developed in a sustainable way that considers not just how to maximise profits but maintain the highest biosecurity standards to prevent the introduction of pests and disease. It will also be crucial to develop new indigenous disease-resistant strains of seaweed, wherever possible,” said lead author Elizabeth J Cottier-Cook, SAMS.