How is full automation possible in grill skewer production? 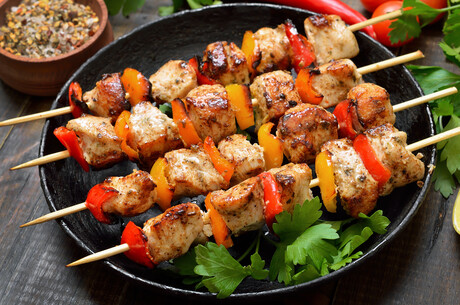 The use of robots in the meat processing industry is expected to increase within the next few years, with more and more manual tasks taken over by computer-controlled robots.

Currently, the cooperation between human and machine is necessary for production of grill skewers. Robotic systems are designed to accelerate and simplify work processes, but how is full automation with maximum performance possible in grill skewer production?

There are many challenges associated with the preparation of the bulk ingredients used in skewers. Nothing grows squarely, so ingredients such as meat, peppers and onions must be cut to size in one place and then transported to the skewer as quickly and reliably as possible. Other challenges include: the surfaces of ingredients are different: either firm, soft or hard; and using more ingredients in skewers creates more demands for technology. Gripper technology is required to pick up the right ingredient perfectly in the shortest possible time without errors and transport it to the skewering.

Systems such as articulated robots or articulated arm robots are limited by speed and acceleration. The working area and thus the necessary distance per cycle depends on the number and type of ingredients. Due to the physical dependence of the speed on distance and time, the cycle time increases — this will reduce the pics per minute. Vibrations caused by acceleration and centrifugal forces can cause positioning errors that have to be absorbed by stiffer frame structures.

Such articulated or gripping arm robots set limits to productivity, when reaching a full-speed production. More power is not possible at the push of a button and they are not scalable at peak times. Production peaks often mean a multiplication of the manufacturing volume during the same time, which requires a higher number of robots. But when only using them in peak times, downtimes are dead capital which means amortisation only through higher production costs for the grill skewers. Also, the wooden stick is exposed to high forces and bent skewers can increase errors at high processing speeds.

One of the most powerful arguments in favour of robotics is the saving of personnel costs. However, additional investments such as visual systems, safety devices, protective fences, gripper technology and programming and much more are necessary. In addition, it takes a lot of time and patience to plan, integrate and commission such technologies. 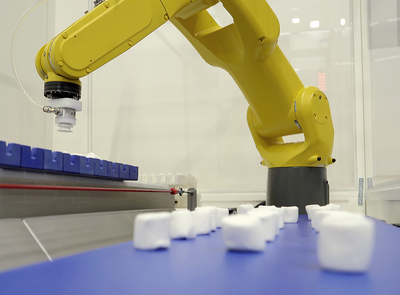 Test installation for checking the productivity of robot systems. MIVEG has been researching robot-controlled skewer production since 2016.

“The cost of implementing a robot in a production environment is five times greater than the cost of the robot alone” (Quote Dr. Torsten Becker, article vdi-z, 29.10.20)

The solution: a hybrid system

A hybrid system from MIVEG, ie, a fusion of conventional technology and robot technology, is designed to help to manage the balancing act required for skewer processing. Using the Skewer Systems 4080 and 720, output can be increased at the push of a button, without any loss of performance. The systems can be  rightsized to user requirements to ensure cost effectiveness of the equipment.

Work steps and processes that were previously time-consuming and labour-intensive can largely be replaced or saved in three system steps:

A process-controlled vibratory conveyor transports bulk goods such as meat, cheese or fish to a skewer automation and then quickly distributes the pieces of meat in the correct position for inclusion in a cassette. A shuttle belt is used for shaped products such as minced meat or meat substitute products. In this production process, employees can optionally equip the cassettes with additional toppings such as peppers and onions. The speed of performance can be maintained and even increased.

Each skewer is guided through the middle of the ingredients and components, without putting any strain on the wooden skewer, using a patented high-speed skewer system from MIVEG. The company said the system can achieve an output of over 97%, even at full speed. 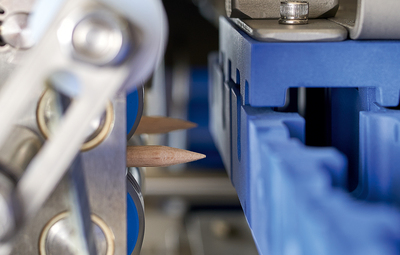 The system quickly guides the skewer and the point of application of force is designed to be always at the most efficient position on the skewer. For maximum output in all production conditions, the grill skewer must be of high quality.

A gantry robot removes the finished skewers from the handle and places them either in packaging or on a conveyor belt. With the attachment on the handle, the end of the stick remains clean and attractive. The skewer is not impaired or contaminated with marinade. 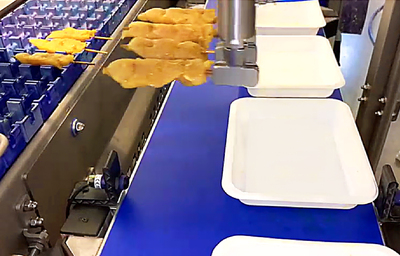 The MIVEG gantry robot takes the finished grill skewers from the skewer handle and places them in the sales packaging.

With the help of the gantry robot, the orientation of the skewers is maintained. When placed in trays, they stay clean. The number of items and the desired placement orientation of the grill skewers can be selected according to user specifications — for example, lengthways or crossways. The skewers are precisely positioned to a tenth of a millimetre.

To stop microorganism growth, it is necessary to eliminate conditions that permit organism...

This meat and fish fraud-detector device is claimed to be 720 times faster and just as accurate...