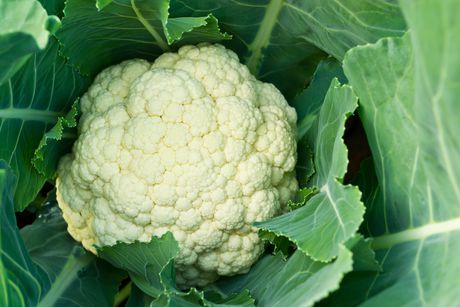 Machines that harvest vegetables pick everything at once — even unripe heads when harvesting cauliflower. This is why human helpers often perform this tedious job. In the future, a machine being developed by Fraunhofer and industry partners will make automated, selective harvesting possible.

Harvesting cauliflowers is a science unto itself because the white heads are hidden beneath numerous leaves. This means that pickers have to pull back the protective leaves head for head to look at the cauliflower and decide whether it is ripe for harvesting. Pickers comb a field approximately four to five times in intervals of two to three days until the very last head of cauliflower has been harvested. This work is strenuous and backbreaking.

Another challenge for farmers is their need for numerous pickers at once for a short time when harvest season is pending. Finding enough hands for this hard work is often difficult, though. Machines on the other hand would harvest the entire field at once and, since cauliflower heads ripen at different rates, thus even heads that are still too small or unripe.

In the future, a machine called VitaPanther will harvest cauliflowers just as selectively as human workers would. It is being developed by researchers at the Fraunhofer Institute for Factory Operation and Automation IFF and their colleagues at ai-solution GmbH together with five other partners: Gottfried Wilhelm Leibniz University Hannover, Steig GmbH, Beutelmann Gemüseanbau, König Sondermaschinenbau GmbH and Inokon GmbH. A prototype of VitaPanther will be finished and tested in 2017.

This machine will benefit farmers in several ways: it will harvest cauliflower heads significantly faster than human pickers and could additionally work at night, too. Another plus is that farmers will be able to dispense with troublesome searches for workers. Martin Steig, farmer and CEO of Steig GmbH and and one of the future potential users of the harvester is convinced it is needed. “Farming is the last profession in which the necessary profits can only be made with a large workforce. Automation is essential for us farmers, because the minimum wage is making vegetable harvesting unfeasible. Harvesting is sustained by two components: the availability of a seasonal workforce and the pay. A shift in one of these components jeopardises the structure. The demand for technology is thus very great.”

How can a machine detect the vegetable’s ripeness without seeing its ‘whiteness’, without weighing it, without knowing its size? These are the questions on which the researchers at the Fraunhofer IFF are working. They are researching and developing the necessary sensor systems along with the software that analyses and pre-processes the data obtained so that the machine receives clear information on whether to harvest or to wait. “We are taking advantage of an effect we discovered in preliminary tests: the leaves of ripe cauliflowers have a different biochemical composition than those covering unripe heads,” explained Prof Udo Seiffert, Manager of the Biosystems Engineering Expert Group at the Fraunhofer IFF.

Hyperspectral cameras mounted on the harvester scan the heads of cauliflowers. Whereas a conventional camera only works with visible light and produces a colour picture consisting of red, green and blue tones, a hyperspectral camera scans a defined range of wavelengths beyond human vision and also encompassing infrared and ultraviolet light. Applying a mathematical model, the researchers can determine the biochemical composition of the leaves and thus the ripeness of the cauliflower based on the intensity of the light reflected in the different wavelengths scanned.

The researchers are not analysing the exact biochemical composition of the leaves, however, because the machine is only supposed to receive a yes-no command to harvest. The mathematical model that decodes the camera images into exactly this command is based on algorithms that originated with machine learning. The researchers are using examples to teach it. They ‘show’ the camera different heads of cauliflower, which are simultaneously being inspected by a human expert. Following such a teaching phase, the system is able to decide autonomously which cauliflower should be harvested or not, even when the heads of cauliflowers are unfamiliar.

A harvester for different vegetables

While the researchers from the Fraunhofer IFF are attending to the sensor systems and data analysis, their colleagues from ai-solution GmbH in Wolfsburg are working on the harvester unit that will be harvesting cauliflower heads in the future. They are building on their asparagus harvester, ‘Spargelpanther’, for this. 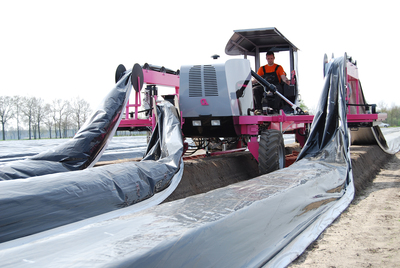 The ‘Spargelpanther’, developed in a previous Fraunhofer project, will also be harvesting cauliflower and leaf lettuce in the future. © Photo ai-solution GmbH