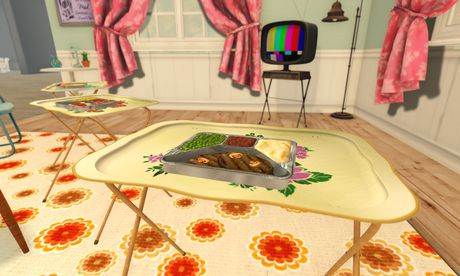 When TV arrived in Australia in 1956 the Americans had already consumed millions of TV dinners — much to the surprise (and profit) of one early manufacturer.

Having overestimated demand for Thanksgiving turkey, in 1954 CA Swanson & Sons had 235 tonnes of leftover turkey, anecdotally stored in railway cars. To complicate matters even further, the refrigeration system in the rail cars only worked when the trains were in motion; so, the turkey was shipped between Nebraska and the US East Coast to keep it cold while the company worked out what to do with it.

There is some confusion over whether one of the Swanson brothers, Gilbert or Clarke, or their sales executive, Gerry Thomas, suggested packing and freezing the turkey as single-serve meals on divided trays as they had seen served on Pan Am flights.

Using a three-way divided aluminium tray, Swanson ‘served’ the turkey with corn-bread dressing and gravy along with peas and sweet potato — the latter two items decoratively garnished with a pat of butter. The frozen meals could be reheated in the oven at 220°C for 25 minutes and cost consumers $0.98 each.

Cashing in on the new wave of modernity exemplified by the television in every home, Swanson called the frozen ready meals ‘TV Brand Frozen Dinners’ and embarked on a huge print, radio and television marketing campaign. Swanson hoped to sell 5000 of these TV dinners in its first year of production.

Estimation was obviously not one of the company’s strengths — in the first place they had overestimated the amount of Thanksgiving turkey they could move and then, going in the opposite direction, grossly underestimated the number of TV dinners they could sell.

Rather than their estimated 5000 meals, the company sold 10 million in their first year of production (a gross of around $220 million in today’s terms).

Sales of frozen meals grew steadily from inception until around 2008 when growth flattened out but did not decline. The American Frozen Food Institute reports that the average American currently eats 72 frozen meals a year with the sector in the US bringing in $9 billion each year.

While sales of frozen ready meals may have slowed the consumption of them has actually accelerated as consumers have simply swapped ‘frozen’ for the perceived health implications and convenience of chilled meals.

The start of the frozen ready meal era

While the Swanson brothers coined the term TV dinners and were the first to invest in a large-scale TV advertising campaign, they cannot really claim to have invented the concept of frozen ready meals.

Without Clarence Birdseye’s development of flash-freezing techniques back in 1923, frozen TV dinners would have been impossible. With flash freezing, liquid nitrogen or its equivalent is used to freeze the food very quickly. The intra- and extra-cellular water in the foods freezes so quickly that ice crystal size is homogeneously small and damage to the cellular structure of the foods minimised. This results in vastly superior texture, flavour and nutritional composition of the food.

The evolution of frozen ready meals began in 1941 when Maxson Food Systems Inc. produced the first ready-to-eat frozen meal. These dinners, called ‘Strato-Plates’, were complete meals designed to be reheated and served to both civilian and military airline passengers. The meals consisted of meat, a potato and a vegetable, served on a three-way divided plate. Strato-Plates were only ever available on planes and never made it to the supermarket shelves.

In the late 1940s, FridgiDinners started selling ‘just reheat’ meals to bars and taverns but also did not venture into the retail ready meal market.

By 1950, Frozen Dinners Inc. had sold more than 400,000 frozen dinners in the Pittsburgh area. The meals, in three-compartment aluminium trays, grew spectacularly in popularity and by 1954 the company owners, Albert and Meyer Bernstein, had formed the Quaker State Food Corporation, expanded their sales area and sold more than 2.5 million frozen dinners.

The only reason they don’t get the guernsey for ‘inventing’ TV dinners is that they didn’t use the term and didn’t mount a huge TV advertising campaign.

The first TV dinners/frozen ready meals consisted of simple, hearty comfort food such as meatloaf, turkey and Salisbury steak, with side dishes of potatoes and green beans or carrots or corn. The meals were reheated in domestic ovens so care had to be taken to ensure all the foods would reheat at about the same rate.

There was minimal automation in the factories where the meals were made. Serving was essentially done by an assembly line of women with spatulas and ice-cream scoops.

Swanson was the TV dinner leader through the middle of the 20th century, moving to four-way divided trays in 1960 when it added added desserts (such as apple cobbler and brownies) to the meals. The company dropped the term TV dinner in 1962.

The first TV breakfasts came to the market in 1969 with pancakes and sausages proving most popular.

Swanson, now owned by Pinnacle Foods, retains only 10% of the US frozen dinner market.

In 1987 the original TV dinner tray was placed in the Smithsonian Institution to commemorate the tray’s impact on American culture, sealing TV dinners’ place in American cultural history. In 1999, Swanson received a star on the Hollywood Walk of Fame.

The advent of the microwave

The introduction of microwave ovens presented a huge turning point for the TV dinner, and it rose to the challenge admirably. The former design of the metal trays, of course, by necessity had to become a thing of the past, and ‘microwave meals’ are now typically packaged in plastic containers with plastic covers, occasionally with a thin layer of aluminium lining to crisp things up (as with pies and other items that have a crust). The first microwave oven-safe trays were marketed in 1986.

Crunchy apples and chips as well as fruity apperitifs are some interesting new products for...

The top five food and beverage trends ripe for investment in 2022 have been revealed in a report...