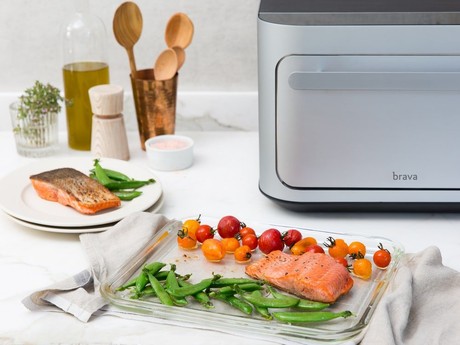 After three years and $25 million in venture capital funding, Brava has released a domestic countertop oven that is claimed to heat up to 260°C in less than a second.

The technology behind the oven is based on a combination of infrared and visible light. Unlike a microwave, the oven can simultaneously sear the outside of the meal while thoroughly cooking the inside.

There are six infrared light bulbs on the top and bottom inside the unit, arranged in three different zones. These lights enable three ways to heat food: convection (much like your traditional oven, where the chamber and air inside are warmed); conduction (where heat is transferred through something like a frying pan); and a transfer of direct energy. The lights can become heating coils and create convection or they can aim the light into the trays and create frying pans. Mostly, they transfer energy directly into the food. The lights can switch instantly between the three modes, giving users a very precise and replicable cook.

The oven’s multizone capabilities mean it can be used to cook different food groups at distinct temperatures, simultaneously. It is claimed that the oven can cook protein, vegetables and starch all on one tray to perfection. It can even make toast.

In an interesting twist, you needn’t just buy the oven from Brava — the company is also offering a premium subscription service where users can order meal kits, ingredients and recipes from partnering firms including Chef’d, Good Eggs and Greensbury Market. The Brava marketplace will be an online destination where members will have access to specially designed meal kits tailored to the oven and developed by Brava’s culinary team.