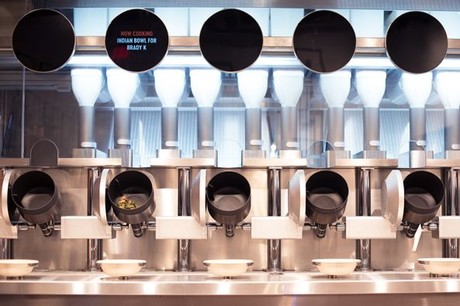 Spyce is a recently opened, fast-casual eatery in Boston that is using automation to provide wholesome, high-quality, delicious and affordable meals.

The restaurant’s menu is based on six different ‘bowls’ at the push of a button. Customers enter the restaurant and are greeted by a human guide who takes them to a touchscreen kiosk where they place their order, one of the six bowls and any extras they want. Once the order is sent to the kitchen, containers dispense the ingredients into one of seven cooking woks.

The woks are tilted so customers can watch their food rotate and cook behind the counter. The bowls are taken from the kitchen counter by a ‘garde manger’, a person who finishes the meal with various cold garnishes like pumpkin seeds, cilantro and crumbled goat cheese. The customer is then handed their bowl.

The woks are all heated using induction because it is efficient, accurate and uses less energy than other heating methods. The induction heating element is located adjacent to each cooking wok, not below, and doesn’t touch the wok.

The robotic kitchen is certified by the NSF (National Sanitation Foundation), and cleans and sanitises the cooking woks after every meal. It’s programmed to monitor cooking, refrigeration and water temperatures, and all components in the refrigerator that touch food are removed and cleaned by humans regularly.

Food preparation is handled by people who feed the prepared ingredients into refrigerated hoppers. The team had to build a technology that handled food carefully, so vegetables wouldn’t get bruised and grains wouldn’t end up mushy, and hoppers fed the meal ingredients to the cooking woks.

The Spyce team hired Sam Benson, of Café Boulud, as the executive chef. Benson had learned about Spyce from Michelin-starred chef Daniel Boulud, who joined Spyce as an advisor after seeing a demonstration of the robot.