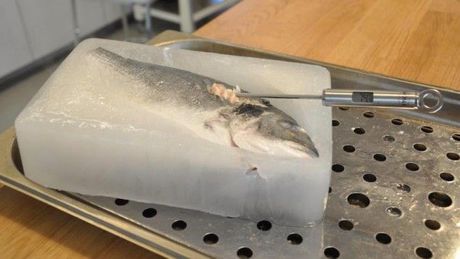 Imagine loading rows of plated raw meals into an oven and coming back 10 minutes later to serve meals cooked to each consumer’s order. All done simultaneously in one pass through the oven.

Currently, microwave ovens are primarily used for reheating or preparing convenience foods. However, domestically their use is declining as consumers have reservations over food zapped by radiation combined with the quality/taste problems inherent in microwave cooking.

Microwaves tend to evaporate moisture, turning already low-moisture foods — like bread and many other carbohydrate-based items — into hard, inedible blocks. Even with foods that should be well suited to microwave cooking — like soups and stews — quality issues prevail. Unlike conventional ovens, microwaves cook from the outside in, so the temperature differences between different portions of the same food can be significant.

Microwaves are powered by a magnetron that sends out the microwaves in any and all directions and whatever it hits gets ‘cooked’. Each oven can have only one magnetron, so there is no accounting for different food products that require different temperatures and different cooking strengths. Even when you are pressing the settings for different foods on the keypads of better quality microwaves, all you are doing is essentially changing the on/off cycle of the waves without regulating their strength.

But new technology is about to change all of this, making it possible to put all the raw ingredients of a complete meal on a plate and in one pass through the system, cook each individual item to perfection.

Even more astonishingly, large commercial versions of the ovens could simultaneously cook steak and vegetables for a group and have each steak cooked to individual specification.

This revolution in cooking and meal preparation is based on using RF energy.

Over the last few years, Freescale Semiconductor has been stealthily working with Israeli start-up Goji Solutions to help it develop the oven concept based on so-called volumetric cooking. Here, an array of RF amplifiers and antennas are controlled in phase, frequency and amplitude for a spatially controlled energy delivery within the oven’s cavity (through sequenced beam forming).

Although beam forming is nothing new, the novelty here is Goji’s unique Adaptive Volumetric Energy Delivery (AVED) algorithms developed to precisely drive the energy delivery to the different types of food placed within the oven, while using signal processing to sense the different RF absorption and resonance levels within the cavity and adjust the cooking parameters in real time.

Freescale’s solid-state RF power transistor products make it possible to have multiple RF chips in an oven, with each chip operating independently — and small enough to beam in on specific foods. Added to this RF technology, Goji has added very precise sensors that can detect the make-up, thickness and moisture levels of foods and, using their database of cooking powers and times, can beam RF frequencies to specific foods, and even specific parts of foods — so that users get the same stable temperature, and the appropriate power and strength, regardless of whether they are cooking peas or thick roasts.

The oven is able to constantly and spatially adjust energy delivery so effectively that it is possible to prepare a typical dinner in a single oven all at the same time. Users simply come back in 15 minutes to find everything cooked perfectly.

Goji’s core energy-delivery technology can be used for cooking foods with or without other heating methods. This cutting-edge technology can be integrated into systems suitable for commercial facilities, residential kitchens or volume food production operations.

It is anticipated that RF-powered ovens will first be sold on the commercial market, and they will probably be quite expensive. Prices will reduce as people see the ovens in action in restaurants, hotels, schools and any other place where getting tasty food out quickly is essential and want one at home. This commodification will lead to mass production and the usual benefits this creates.

In the case of large professional ovens, it is envisioned that several rows of dishes will be cooked in a single pass with each dish customised to meet the consumer preference, meats rare, medium or well done all cooked simultaneously.

Goji is already in talks with several manufacturers of consumer products for mass production of ovens based on this technology and they are expected to hit the market towards the end of 2016.

Recently, Goji Israel Food Solutions showed off its oven to about 600 people, who applauded when they pulled a fully cooked dinner out of the oven, consisting of a perfectly cooked salmon fillet, potatoes, couscous and cherry tomatoes 10 minutes after all the items had been put inside on a single tray — raw, and in the case of the fish and couscous, frozen. Each item was perfectly cooked and had a bevy of thermometers recording its external and internal temperatures.

Then the Goji oven worked on a whole salmon frozen in a block of ice; and when the cooking cycle was done, the block of ice was opened to reveal a perfectly cooked, steaming fish, with an internal temperature of 70°C.

With a Goji-enabled professional oven, commercial kitchens and food service providers will be able to prepare food like never before. Goji-enabled ovens will prepare food in a fraction of the time of conventional methods, greatly increasing yields without compromising quality.

The ovens will be used to cook, bake and roast various foods simultaneously with all cooked to perfection at same time.

Watch this space as the reinvented microwave becomes a must-have reality.

Image: Showing off the Goji expertise: a block of ice containing a perfectly cooked salmon.

What's new on the shelf this August?

Genuine wasabi, brilliantly coloured apples and AI-designed milk are some of the products that...

From native-plant beer to a plant-based milk developed with the help of artificial intelligence...