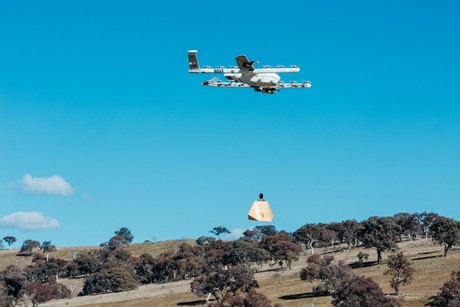 Forgetting milk or bread from the supermarket is annoying for most people, but what about those living in rural areas where the closest store is a 40-minute drive away? Drone technology has been developing over the last few years, and Project Wing is attempting to alleviate this inconvenience with their delivery drone tests in south-eastern Australia.

After their first successful drone delivery to members of the public at Virginia Tech University in 2016, Project Wing — created by Alphabet’s research lab X — is focusing on helping rural communities on the border of the ACT and NSW. Residents in these areas suggested the technology could benefit them by providing food and medical supplies that are otherwise difficult to acquire.

While their first delivery was conducted in an open field, the company is looking at the wider logistics of delivering to individuals in their own home, and they have partnered with Mexican food chain Guzman y Gomez and pharmacy chain Chemist Warehouse in the process.

Using the Project Wing app on their smartphones, testers can purchase food or medicine which will be picked up by the drone from their partner’s loading sites and delivered to testers at their door. But the use of drones has been viewed as a logistical nightmare in previous trials with problems such as avoiding obstacles and maintaining stability to name a few.

After numerous tests, Project Wing has developed a delivery drone that can travel 10 km from its take-off location at speeds of up to 120 km per hour while carrying a payload of up to 1 kg. Working closely with the local and state governments and CASA (the Civil Aviation Safety Authority), the drones should remain safe and comply with Australian law.

Changing conditions are something that the drones will also have to account for. A flight route can be pre-planned using the unmanned traffic management (UTM) platform and the drone is equipped with sensors that can identify obstacles such as parked cars or outdoor furniture. With algorithms constantly learning about new delivery locations, the more test deliveries the company conducts, the smarter and safer the aircraft will become.

Personalised deliveries means drones must navigate through trees, powerlines and fences and be prepared to deliver to a multitude of places including backyards, public parks and farmlands. However, the company has acknowledged that there is still much to be done before this service is fully refined.

“We have to incorporate customer preferences — e.g. many of our testers would like packages delivered to backyards so they're not visible from the road, or near kitchens so food items can be unpacked quickly,” said James Ryan Burgess, project lead at Project Wing, in a blog post.

Although they have established what people want delivered, learning how to make the technology user friendly and how to accommodate their partners’ requirements are the next hurdles.

Project Wing aims to pick up packages from anyone in almost any location, but this means packages should be loaded and received without any specialised infrastructure and by people without specialised experience. This is where the company aims to learn from Guzman y Gomez and Chemist Warehouse.

For Guzman y Gomez, the technology needs to seamlessly fit into their kitchen operations and enable workers to continue to deliver fresh burritos and chips to customers. Understanding how much notice to give them for a drone’s arrival is crucial for them to be able to time the cooking, packing and loading of the product.

As part of this testing period, Chemist Warehouse is offering nearly 100 products including vitamins, dental care, sun care and over-the-counter medicines. Burgess suggested that this causes problems in terms of packing and delivering a wide variety of products.

“By practising how we pack items of very different shapes and sizes into our fixed-sized package, we’ll learn how to optimise how many items we’re able to deliver per flight,” he stated.

Therefore, the company is taking the complex delivery problems away from merchants such as Guzman y Gomez and Chemist Warehouse.

Whether it’s providing medicine to the door of ill people or helping those cut off by fires or floods, the drone deliveries aim to be commercialised for a number of consumer needs in the future. For example, their upcoming tests will establish how they can help the Australian Capital Territory Rural Fire Service. While these delivery tests only encompass a select number of testers, the overall aim is to study the feasibility of a larger delivery network.