Feeding the troops at Australia's Antarctic and sub-Antarctic stations 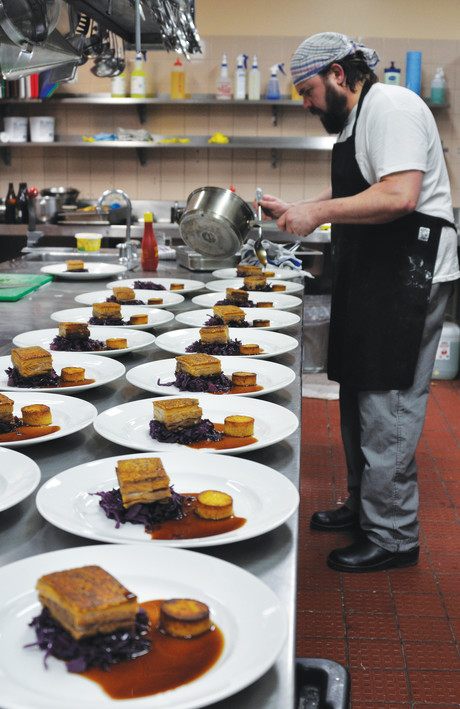 When the closest supermarket is more than 4000 km away, and resupply is just once a year, getting the shopping list right for Australia’s Antarctic and sub-Antarctic stations is crucial.

From Christmas feasts to the traditional mid-winter dinner, the man charged with ensuring everything is on the table is Australian Antarctic Division Chefs’ Adviser Noel Tennant.

“Life on station pretty much revolves around food,” Noel said. “Meals bring variety and excitement to the expeditioners’ lives, particularly during the long, dark winter months when it can become a bit like Groundhog Day.

“Food is also the first layer of defence, to warm the body against the cold, so getting the right amount and type of food is essential.”

The division has an annual catering budget of $1.3 million for 12 months. This means today’s expeditioners can enjoy greater variety and more appetising fare than the ‘hoosh’ (stewed pemmican and sledging biscuits) relied on by early Antarctic explorers.

“I work out the average amount of food a person would eat over a year, then I round up,” Noel explained. 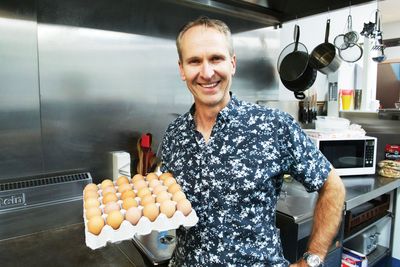 “We have to have some ‘fat’ in our stores, because we could end up with more people on station at any time, if the ship is late or people get stuck because of bad weather.”

The station shopping list includes about 52,000 kg of frozen and fresh fruit and vegetables. Any fresh produce has to have a long shelf life.

“We send a lot of potatoes, carrots, apples and citrus south. We tend to steer away from soft fruit and vegetables that spoil easily,” Noel said.

“Fresh eggs are oiled with paraffin before they are sent south, which essentially seals the shell and stops the egg from going off.

“In the dairy department, all the milk is powdered and the yoghurt is made from freeze-dried cultures. We mainly use hard and semi-hard cheeses that are more likely to last 12 months.”

The food is generally not plate-ready and most things have to be made from scratch.

“We provide a lot of base ingredients that take time to prepare; for example, the chefs have to make bread and pastry daily. But this also gives them more scope to produce different dishes.”

The journey by ship across the notoriously rough Southern Ocean can take a toll on the condition the food arrives in, so Noel and his team have developed a range of methods to ensure the supplies arrive in top condition.

“We pack everything very carefully in refrigerated containers and use ozone generators in transit, to keep bacteria and fungi at bay,” he said.

“We also put ‘ethyl stoppers’ in the containers of fresh fruit and vegetables, to slow the ripening process. Ethylene is produced by fresh food, such as bananas, when it ripens, which accelerates the ripening of everything else around it.”

The kitchen at all the stations is a focal point and social hub for expeditioners, so getting the right chef is central to the happiness of the team.

While they don’t have to be Michelin-starred chefs, they do need to be solid all-rounders, producing more ‘home-style’ food. They also need to be able to step it up when there are big social occasions, such as the traditional mid-winter feast, Christmas or birthday celebrations. 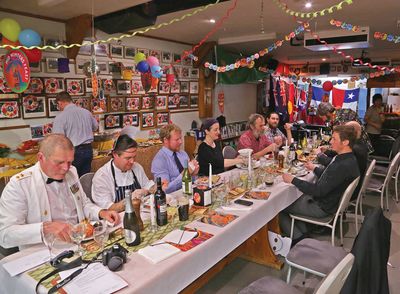 Each station has one winter chef, while there are two extra chefs at Davis and Casey over the busy summer period, when the kitchen can be catering for up to 100 hungry expeditioners.

“Our chefs generally work five and a half days a week and are rostered off on Sundays. On the rest day the ‘slushy’ usually steps in to fill the void, or it will be a ‘catch and kill’ affair, with expeditioners fending for themselves,” Noel said. 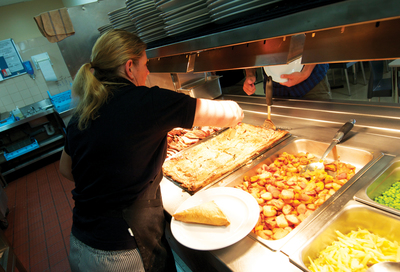 Antarctic chefs need to be solid all-rounders, producing ‘home-style’ food as well as being able to pull out all stops for special occasions. Image credit: Jessica Fitzpatrick, Australian Antarctic Division.

Most importantly, chefs must manage their supplies carefully so that they don’t use up all their ingredients within the first month.

“If you run out of an ingredient, you can’t just ring up a supplier. You have to be innovative and resourceful in what you can produce from a finite Antarctic pantry.”

This article is reprinted with the permission of Australian Antarctic Magazine: www.antarctica.gov.au/magazine.