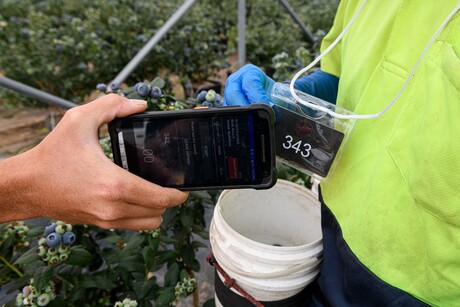 "There was a gap in the small winery market for easy-to-use technology which provided reliable data," Child said.

"Our tool was initially developed to provide growers with picking operational data. However, this project is an opportunity to extend our product's capability beyond labour costs. Once developed, it will apply to any small winery or farming operation."

Child said the component was currently in development and expected to be rolled out at Kay Brothers by the end of the year.

"The system will capture all costs associated with operating a small vineyard including equipment, machinery and fertiliser use. It will report on vineyard operations, what materials were used and attribute that data to specific blocks. The winery can then examine how that relates to profitability."

Child said the tool — an RFID handheld scanner operated with touch-screen technology — would also record Kay Brothers' labour costs during the harvest period in early 2021, although this was a secondary benefit.

She said many small wineries or farming operations continued to use spreadsheets to record farm data.

"However, it's just too much for most small operators to capture this type of data on a paper-based system. Our technology captures data at the source, tracking operational costs at the block level."

Kay Brothers General Manager Steven Todd said a desire for accurate cost analysis was the driver of the winery's decision to move to a technology-based system.

"To have two or three years of data to compare should better inform our pricing and trade margins. Improved cost control should lead to increased profitability," he said.

The small, artisan winery, established in 1890, produces seven varieties of grapes going into wines for the prestige market both domestically and internationally.

"All blocks have different needs based on the age of vines (from 25 to 130 years). We needed a system that could reflect the differences in those blocks and how we treat the vines.

"Traditionally we've used manual spreadsheets. However, spreadsheet data is not always reliable and is onerous to record. It's also sometimes difficult to isolate costs over different blocks in the vineyard.

"We're always keen to adopt technology for the right reasons. We looked at various other systems but found most were glorified spreadsheets. We didn't want to move to technology where we'd have the same problem and still have no faith in the data. We knew APT had an effective tool that could be customised for our needs."

Todd said as a member of the Sustainable Winegrowing Australia (SWA) Program, Kay Brothers was committed to upholding sustainable practices. He expected AgPick data to help the winery reduce outputs such as fuel and chemical use and gain environmental and financial benefits.

"AgPick's ease of use and swipe-care time tracking is also attractive and we envisage minimal staff training," he said.

The SECUNORM Profi40 MDP is a metal-detectable safety knife with a large cutting depth and...

Sidel's Cermex WB47 case packer can run RSC and HSC cases with an increased speed of 22...