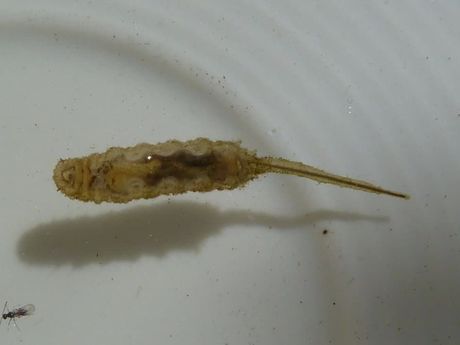 The immature stage of the rat-tailed maggot, the drone fly Eristalis tenax, resembles a hairless baby rodent with a ‘tail’ that is actually used as a breathing tube. Even though these maggots live in stagnant, fetid water that is rich in bacteria, fungi and algae, they are able to avoid infection by any of these microorganisms.

And now we know how.

A cell biologist at the Institute of Ophthalmology at University College London, Matthew Hayes, has discovered never-before-seen structures that appear to keep the maggot mostly free of bacteria, despite living in a very dirty environment. His findings appear in an article in the Journal of Insect Science.

Using scanning and transmission electron microscopes, Hayes found that much of the larva is covered with thin spines, or ‘nanopillars’, that narrow to sharp points. He noticed a direct relationship between the presence of the spines and the absence of bacteria on the surface of the larva and speculated that the carpet of spines simply makes it impossible for the bacteria to find enough room to adhere to the larva’s body surface.

“They’re much like anti-pigeon spikes that keep the birds away because they can’t find a nice surface to land on,” he said.

Hayes also ventured that the spines could possibly have superoleophobic properties (the ability to repel oils), which would also impede the bacteria from colonising and forming a biofilm that could ultimately harm or kill the maggot. The composition of the spines is as unique as the structures themselves, Hayes said. Each spine appears to consist of a stack of hollow-cored disks, the largest at the bottom and the smallest at the top.

“What I really think they look like is the baby’s toy with the stack of rings of decreasing size, but on a very small scale,” he said. “I’ve worked in many different fields and looked at lots of different things, and I’ve never seen anything that looks like it.”

Electron-microscope image showing the nanopillars that poke up from the body of the rat-tailed maggot. The length and density of the spines vary as shown in this cross-section image of the cuticle. Image credit: Matthew Hayes.

This work with the rat-tailed maggot is leading him to examine other insects as well, including the ability of another aquatic invertebrate — the mosquito larva — to thwart bacteria. Such antibacterial properties have applications in many different fields, including the food industry where biofilms can act as pathogen banks.

Hayes’ full article, Identification of Nanopillars on the Cuticle of the Aquatic Larvae of the Drone Fly (Diptera: Syrphidae), has been published in the  Entomological Society of America’s Journal of Insect Science and is available at http://dx.doi.org/10.1093/jisesa/iew019.