Wider applications for the 'unboil-an-egg' machine 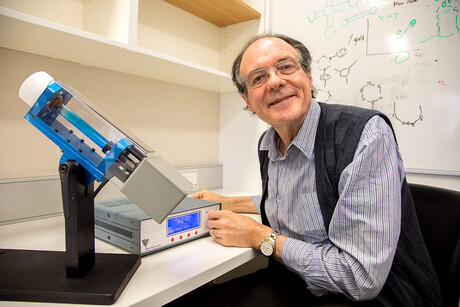 A machine that can ‘unboil’ an egg by unravelling its proteins and has potential applications for new electronics and drugs is now likely to have wider clean chemistry applications.

The new applications for the Vortex Fluidic Device — invented by Flinders University’s Professor Colin Raston and known as the ‘unboil an egg’ machine —  follows 100,000 experiments and then a research paper on understanding fluid flow in the VFD, which was recently published in Nanoscale Advances.

Professor Raston hopes this publication will encourage more researchers to embrace the VFD and explore more innovative applications for the device, maybe even some in the food processing industry.

“How fluid flows is one of the grand challenges of science,” Professor Raston said. “What we have been doing with the VFD provides answers for liquids subjected to mechanical energy.”

Since 2013, Professor Raston has been working with his team to explore the possibilities of the VFD, which is capable of controlling chemical reactivity, materials processing and probing the structure of self-organised systems, enabling rapid and now predictable modifications.

The VFD has shown its capability in the synthesis of esters, amides, ureas, imines, alpha-amino phosphates, beta-Keto esters, modified amino acids and the local anaesthetic, lidocaine.

Professor Raston said the high-tech, yet simple device can be used in medical and pharmaceutical research, food processing, materials processing and more, aligned with a range of industries — all with a focus on cleaner, greener and cheaper production — and he hopes that the new conclusive summaries about the VFD experiments will see it embraced by more research organisations around the world, and be taken up by industry.

“The topological fluid flows, which were established as ‘spinning top’ flow, double helical flow and specular flow, account for all the processing outcomes and applications of the VFD — this is an exciting discovery,” Professor Raston said.

“We have established the topological features of high shear fluid flow in the vortex fluidic device at sub-micron dimensions, at a critical tilt angle of 45 degrees, being the optimal angle for myriad applications of the device.”

The proposed flow patterns in the VFD provide insights that allow accurate prediction and control the formation of nanostructures in the VFD and chemical reactions. The flow patterns also provide an understanding of the advantages of VFD processing relative to using other methods.

As the latest example of green chemistry innovation, PhD candidate Matt Jellicoe has led research into using the VFD to control the coating of particles without using other waste generating reagents.

“I believe the outcome of this research to be significant because we demonstrate the coating of particles 2–6 microns in diameter with zero waste and up to 98% efficiency. This could be beneficial towards the pharmaceutical companies which coat drugs with significant lower yield, thus leading to run-off of dangerous chemicals into freshwater streams and the air,” Jellicoe said.

He expects the next stage of testing will investigate the possibility of using the VFD as a drug-coating device.

“This may significantly reduce the effects on the environment,” Jellicoe said, “and this is what excites me the most. The potential impact, especially on the environment and the economy, could be unfathomable.”