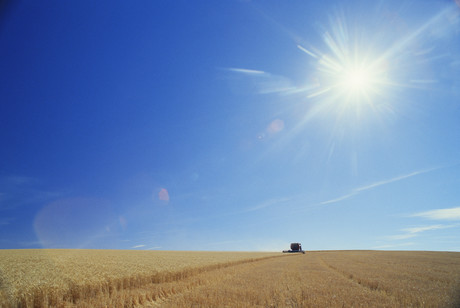 Early sowing of winter wheats could increase Australian wheat crop yields, which could add around $1.8 billion to the national economy and improve global food security.

Australian growers have sown spring wheats in May or June following autumn rain for more than a century, but researchers from La Trobe University and CSIRO have been investigating alternatives over the last seven years.

Lead La Trobe researcher Dr James Hunt explained that a sharp decline in autumn rainfall in south-eastern Australia since the 1990s has led to a significant reduction in wheat crop yields, in part because the crops are being established and flowering too late. He said growers have been able to increase yields by pushing sowing into a narrow window in early May, but this is getting harder to achieve.

"A combination of less reliable season opening rains and hot and dry springs has led to a stagnation in national wheat crop yields," Hunt said.

The researchers discovered that sowing winter wheats from March increases the window of opportunity for sowing because it potentially uses stored soil water from summer rains, which haven't declined and have increased in some areas.

"We needed to find a genotype of wheat in which development is slowed so that sowing could be moved earlier but flowering still occur during the optimal window," Hunt said. "This needed to be slowed either by slower flowering caused by short days (photoperiod) or through the need to experience cold winter weather (vernalisation)."

The team used almost genetically identical (near-isogenic) lines of wheat developed by Dr Ben Trevaskis at CSIRO that varied in vernalisation and photoperiod sensitivity to evaluate the yield performance at sowing times much earlier than previously researched. They discovered that one of the wheat lines has a novel 'fast' winter development pattern.

"Winter wheats are mostly grown in high-latitude environments with very cold winters such as northern Europe and are too slow for Australian conditions," Hunt said.

"However, we found that in the Mediterranean environments of the southern and western wheat belt, where most of the wheat in Australia is grown, the fast winter line sown early (up to 40 days earlier than traditional sowing times) could yield as well as or better than the fast spring sown at its optimal time.

"And in the temperate regions of south-eastern Australia, a mid-winter line (development slowed by both vernalisation and photoperiod) sown up to 40 days earlier yielded as well as the fast spring sown at its optimal time."

Using crop simulations, they estimated that national yields could increase by 20%, producing an additional 7.1 million tonnes of wheat worth up to $1.8 billion to the national economy.

The next step is in breeding appropriate winter cultivars and making them available to growers. As a result of this research, a number of cultivars have been developed by commercial breeding companies and are under evaluation in trials across lower rainfall areas of South Australia, Victoria and New South Wales.

The research was published in Nature Climate Change.