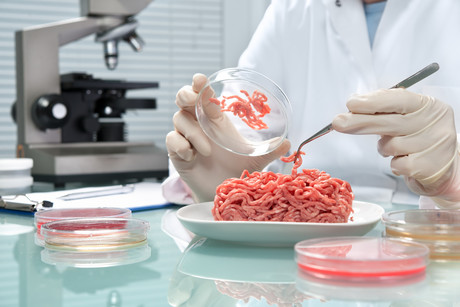 Health requirements and dietary preferences have seen an increase in the number of different meats and protein alternatives available on supermarket shelves. But lab-grown meat may be more widely accepted than we thought, with vegans more open to trying it than meat-eaters.

Surveygoo was commissioned by PR agency Ingredient Communications to carry out an online survey of 1000 consumers in the UK and the USA to establish if they would be open to eating these products.

After explaining that cultured meat was real meat grown from cells in a laboratory instead of animals, the survey found that the majority of respondents were not open to trying it (38%), but 29% said they would. The remaining 33% were unsure.

The survey also looked at geographical differences in the perception of cultured meat and found that if the products were to become commercially available, they should be tested in America first. This is due to the fact that 40% of Americans would be happy to try cultured meat, compared to more skeptical UK consumers at only 18%.

Surveygoo Managing Director Neil Cary said the survey “shows how countries which, on the surface, appear to share many similar values, may in fact diverge quite widely on certain issues”.

Surprisingly, 60% of vegans were open to trying this type of meat, which was significantly higher than the mere 28% of meat eaters. This was followed by vegetarians (23%) and pescatarians (21%), who were less accepting of lab-grown meat.

However, Ingredient Communications Founder and Managing Director Richard Clarke explained why non-meat eaters may be more open to the idea of lab-grown meat.

“People enjoy eating meat, but often feel guilty about related issues such as animal welfare and the impact of farming on the environment. Cultured meat addresses those concerns, which is a compelling benefit,” he said. “Nevertheless, we were surprised by how many respondents expressed a willingness to eat cultured meat. It’s such a new concept and when you consider the backlash against GMOs, and the unstoppable momentum of the naturalness trend, it seems counterintuitive that people would be willing to eat meat produced in a laboratory.”

He continued by suggesting that the willingness of vegans to try the meat may be due to the fact that they tend to be more open to alternative sources of protein. The cultured meat conforms to the idea of sourcing protein through more ethical means, and Richard said, “This offers interesting potential for companies operating in the embryonic cultured meat industry.”

Cary stated that performing surveys like this one is useful in determining customer acceptance of certain products. “It’s very early days for cultured meat and our findings highlight the value of asking consumers how they feel about cutting-edge developments such as these,” he said.