The antioxidant power of grasshoppers and silkworms 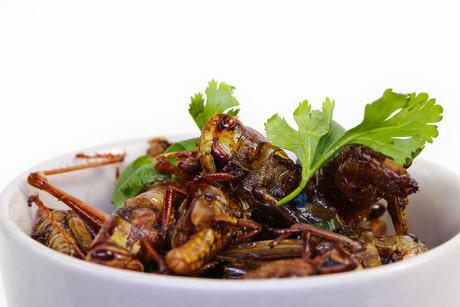 Edible insects are a valuable source of protein, polyunsaturated fatty acids, minerals, vitamins and fibre. The antioxidant capacity of insects was tested on a range of commercially available edible insects and invertebrates, with inedible parts like wings and stings removed. The insects were then ground up and two parts extracted for each species: the fat, and whatever would dissolve in water.

Each extract was then tested for its antioxidant content and activity. The antioxidant capacities of orange juice and olive oil were tested using a similar set-up.

“Fat from giant cicadas and silkworms showed twice the antioxidant activity of olive oil, while black tarantula, palm worm and black ants are placed in the bottom of the ranking,” said Prof Serafini.

A high antioxidant content is a primary requisite for screening the antioxidant potentiality of novel foods to determine if they are meant for human consumption.

“The in vivo efficiency of antioxidant-rich food is highly dependent on bioavailability and the presence of an ongoing oxidative stress. So as well as identifying other antioxidant compounds in insects, we need tailored intervention studies to clarify their antioxidant effects in humans,” concluded Prof Serafini.

Corbion, a bio-based food ingredients supplier, has appointed IMCD as the distributor for most of...