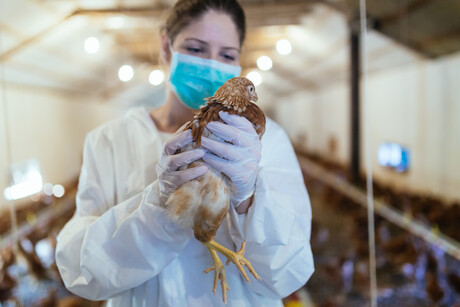 An independent commercial-scale farm trial has found that slower growing broiler chickens are healthier than conventional breeds of birds.

The study, by researchers from FAI Farms, the University of Bristol and The Norwegian University of Life Sciences, set out to interrogate the commercial welfare implications of two critical aspects of the commitment — a move to slower growing breeds and lowering the stocking density.

While there are benefits of providing chickens with more space — by slightly lowering the animal density, changing to a slower growing breed results in much better health and more positive experiences for these birds, according to the study authors.

Dr Siobhan Mullan, Senior Research Fellow in Animal Welfare at the Bristol Vet School, said, “This first independent commercial-scale trial provides robust evidence of the health and welfare benefits of slower growing breeds of chicken. We hope that it will help to drive changes in supply chains and large companies to bring about real improvements to chicken welfare.”

The standard birds experienced poorer health as indicated by higher levels of mortality, hock burn and pododermatitis as well as greater rejections at processing. Furthermore, the conventional birds showed less perching on enrichment bales as well as fewer positive ‘play’ and ‘exploration’ behaviours.

Professor Ruth Newberry and Dr Judit Vas at The Norwegian University of Life Sciences Faculty of Biosciences point to the importance of including indicators of positive experiences in animal welfare studies. “Until recently, play was hardly ever mentioned in studies of chickens. We found that, when you walk through a commercial flock, you just have to turn around and look behind you to see chickens frolicking in your footsteps. This was especially the case in the slower growing flocks.”

FSANZ is calling for comment on an application to allow an existing sweetener, steviol glycoside,...

Call for comment on new type of GM corn

Food Standards Australia New Zealand is calling for comment on a genetically modified corn, which...

A report on Australian lemon myrtle has unveiled the native plant's potential to drive a...