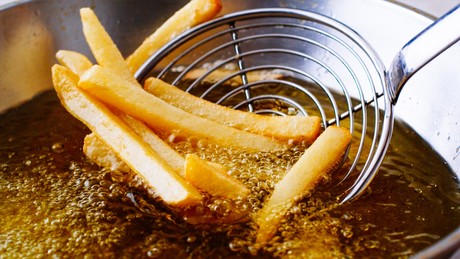 Acrylamide can form when starchy foods are cooked or processed and it has been detected in a range of foods including fried or roasted potato products, cereal-based products (including sweet biscuits and toasted bread) and coffee. FSANZ recommends that exposure to acrylamide in food should be limited as the chemical is known to cause cancer in animals.

Estimated dietary exposures of Australian consumers to acrylamide in food found that the levels were generally lower than, or comparable to, those reported in previous Australian and international studies. Even so, the results were in the range of those considered to be of possible concern to human health by the WHO Joint Expert Committee on Food Additives.

New farming and processing techniques are being investigated to produce lower levels of acrylamide, for example, lowering cooking temperatures, using enzymes that reduce acrylamide formation and obtaining raw materials with lower reducing sugar levels. However, reducing acrylamide in some foods, such as coffee, is difficult without changing its taste.

Frutarom conducted tests on fried potatoes and other snacks applying its all-natural INOLENS 4 and SyneROX HT tailor-made formulations. Both formulations significantly reduced acrylamide concentration in the food matrices. The level of acrylamide was decreased by 60% in the snacks, and more than 90% in the fried potatoes. The research team noted that such high reduction levels are readily attainable for food applications that have very high levels of acrylamide.

The two formulations also improved oxidative stability of snacks and fried potatoes, as indicated by hexanal levels. The performance of INOLENS 4 and SyneROX HT exceeded that of the synthetic antioxidant TBHQ, which is commonly used for frying oil stability improvement.

“Using these natural formulations in baking, frying applications and other high-heat applications is an ‘all-in-one’ solution that reduces acrylamides while significantly slowing oxidation and rancidity of oils and fats and extending shelf life,” said Ohad Cohen, GM for Frutarom Food Protection Solutions.

INOLENS and SyneROX are customised blends of rosemary oil and/or water-soluble extracts in powder and liquid forms and have no impact on flavour, texture or appearance.